The bulker Polyneos arrived at pier 28 yesterday for a top off load of grain. 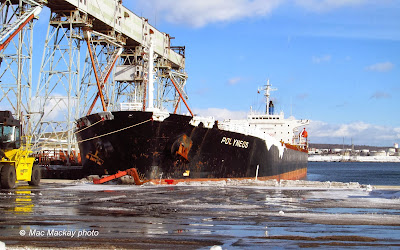 Due to St.Lawrence River draft limitations ships of this size usually can't take a full load in ports such as Quebec City, so they come on to Halifax or Gulf of St.Lawrence ports to top up their cargo. Polyneos, flying the flag of the Marshal Islands, but owned by Odysea Carriers SA of Athens, is a a large ship. Measuring 37,623 gross tons and a whopping 72,080 deadweight, it can load to a draft of over 13.4 meters (44.75 feet).
The ship was built in 1997 by Hitachi Shipbuilding at Maizuru, Japan and carried the name Juno Island until 2010.
Posted by Mac at 1:38 PM