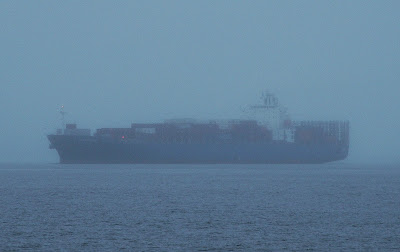 When HS Beethoven arrived at dusk and in foggy, rainy, misty conditions on Monday December 2, it looked like a routine arrival, albeit the ship is not a regular caller.
The ship first appeared in Halifax on August 21, 2013 for Atlantic Container Line, as a substitute while regular ACL ships were in refit or under repair.    Monday's arrival was for Hapag-Lloyd, and again as a substitute on H-L's ATA Service, its traditional Transatlantic service between Europe and the North American east coast.
That it did nor leave on time on Tuesday was not particularly unusual because of high winds and heavy rain, which would have slowed unloading.
Now however we hear that there was an incident aboard involving the possible collapse of a container stack and the puncture of a fuel tank.
Repairs will take a considerable time, and the ship may well have be unloaded before it can sail again.
Updates will be posted when available.

HS Beethoven was built by Hanjin Heavy Industries of Busan, South Korea in 2002 as HS Voyager for Hansa Shipping of Germany - its current owners. It was renamed MSC Arizona in 2003 for a charter and then APL Italy in 2005 for a charter. It received its present name in 2009. It measures 50,243 gross tons and had a capacity of 4,350 TEU (500 refrigerated.)

HS Beethoven at Fairview Cove this morning was still being unloaded. It does appear that the ship will have to be completely unloaded, and its cargo transferred to other ships.
Posted by Mac at 9:50 PM