At Halterm the southernmost crane on pier 41-42 has finally begun to move to its new position on pier 36. 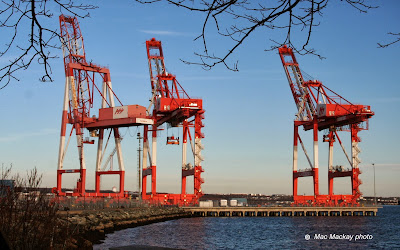 1. To the left is the old crane (#3) on its way to a new position. The large cranes (Max 1 and Max 2) have been moved south out of the way, onto the new Pier C extension.

When it proved impossible to move it by ship in September, it was decided to move crane #3 over land. Last week Global Rigging and Transport mobilized a multi-wheel dolly system and by today had moved the crane off its rails and clear of the pier face. 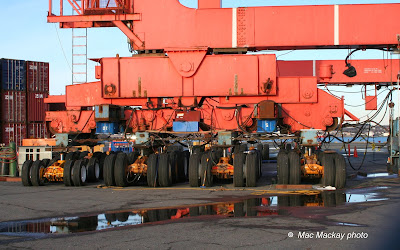 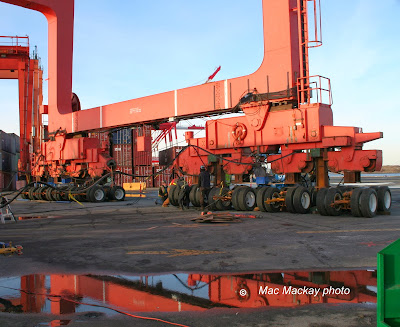 2. and 3. A system of dollies and hydraulic jacks was used to lift the crane and move it off its rails. 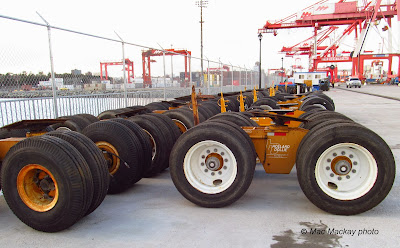 4. Last week the dollies were lined up in readiness to lift and move the crane. 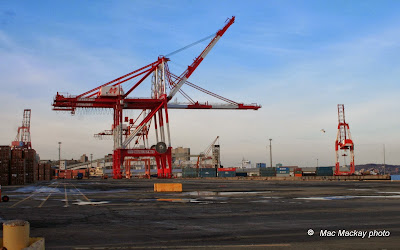 5. At some point the newest Halterm cranes, Max 3 and Max 4 will also have to move out of the way to allow the older unit to pass on its way to pier 36 to join two similar small cranes.  There is also one crane (seen immediately behind Max 3 and Max4) which has special bogies, that allow it move back and forth between the roughly perpendicular pier 36, and pier 41