Despite the loss of big tankers coming into Halifax with the closure of Esso's refining operation, there are still lots of tankers calling in Halifax. Today there were three in port 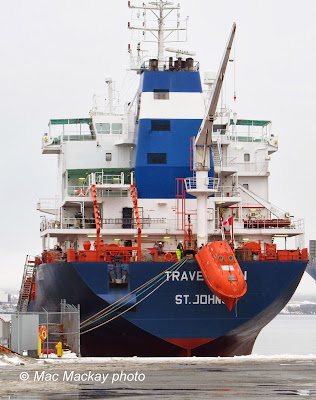 1.   Freshly out of drydock (see yesterday's post) Travestern is tied up at pier 34 completing its refit. Crews were busy working on the ship's free fall lifeboat. It normally nests in the orange cradle just above the anchor.

2.   Energy Protector arrived this morning and went to anchor in Bedford Basin. It was last here December 12 with refined product for Esso's tank farm, and presumably has some more on this trip. 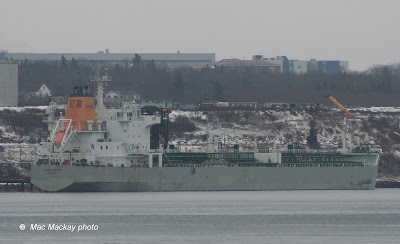 3.  Irving Oil's Nor'easter (flying the Marshal Islands flag) is a rare caller in Halifax. Since the end of refining in Dartmouth, Irving tankers have been much more frequent visitors. Irving now has to supply its Halifax area needs from Saint John, instead of buying it from Esso, so their only Canadian flag tanker Acadian is running hard to meet demand.  It was therefore necessary to apply for a coasting license for Nor'easter to fill in. The license application was for the period December 4 to 17, but may have been extended.

Rumours are now emerging that Irving Oil will be reactivating its own dock in Woodside. Long abandoned when Irving Oil joined its Woodside tank farm with Esso by pipeline, they may now be finding that there is no advantage to that connection. Today a core drilling barge was working off the old Woodside dock, a sure sing that some engineering may soon begin on the design for a new pier.

4.  On a day almost as foggy as today, but in June 1977, Irvingstream was tied up at the Irving Woodside pier. It was a small "L" shaped structure, and took some imaginative line handling to several points on the shore to secure a large ship.


5.   Despite its small size, the pier could accommodate quite a crowd.In this 1984 view Irving Canada has just sailed from the outside of the pier (with the assistance of Point Vigour), the barge Irving Dolphin is on the inside and Irvingwood is on the north side. The spindly wood structure of the pier was eventually condemned, but remains in place.