There is no filter for "snain" * that nasty mixture of snow and rain that fell periodically in Halifax today. That is why pictures of the Dutch ship Jan van Gent are extremely fuzzy.

The ship is owned by Wagenborgs, but painted in untypical colours, and is chartered to Nirint, another Dutch company, for its trade with Cuba. The ship is on its return leg from Cuba to Europe, and carries a load of nickel sulfides mined in Cuba for processing in Canada.
In 1960 Fidel Castro's government nationalized the nickel mines and processing plants operated by Freeport McMoRan Corp. As I understand it, FMC had been pressuring Castro to keep in place lucrative tax breaks granted by the previous dictator Bautista. Those breaks and a virtual blank cheque issued by the US government to stockpile nickel and cobalt from the mines as strategic assets had been a cash cow for FMC. Subsequent US governments were not so sure about the necessity of the stockpiles, and much of the dealings that FMC had with Bautista.
Subsequently the Canadian company Sherrit International formed a joint venture with Cubaniquel to mine, process and sell the nickel. The move raised the ire of Cuban foes in the US, and the Helms-Burton Act (the Cuban embargo) resulted in Sherrit executives being banned from the US.
Nevertheless the arrangement with Sherrit has been in place since about 1991 and nickel represents one of Cuba's largest sources of foreign exchange. 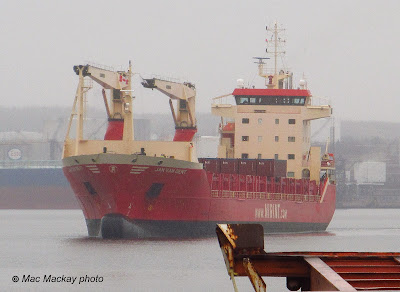 Jan van Gent will unload the nickel sulfides into waiting rail cars at pier 31, and the cargo will head to Fort Saskatchewan, AB for refining. It will then be exported to Europe. The material is tricky to handle, since it flows easily and can create instability in a ship if not stowed properly. The sulfides from Cuba come in giant bags, that are hoisted off the ship with its own cranes.
The ship was built in 2009 in Yiching, China by Damen Yiching Shipyard, created by the Dutch shipbuilding company Damen (they also have yards in Viet Nam and Romania). It measures 8,999 gross tons, 12,080 deadweight tonnes, and carries two cranes.

* I did not invent the word "snain". I credit to the legendary Detroit weatherman Sonny Eliot.
Posted by Mac at 10:37 PM