Following my post of December 7 wondering what became of the gate vessels Porte St.Jean and Porte St. Louis after they sailed from Halifax in September 2000 Thanks to several readers who have sent e-mails with additional information, which allowed me to follow up on the duo. 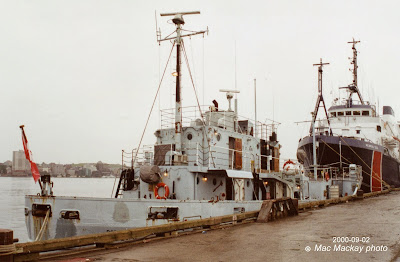 So far I have found the fate of Porte St.Jean. It ended up at the Derecktor Shipyard in the Fort Lauderdale FL area of Dania Beach, and may have been owned by the yard's founder, the late Robert Derecktor. After his death in 2001 work on converting the ship to a yacht was suspended.  One photo has been located showing the work in progress, with the deckhouse removed and the start of a new flying bridge type wheelhouse.

On April 29, 2004 the ship was taken to sea and sunk as an artificial fish reef and dive site. Tracing the ship was difficult because it had been renamed (perhaps unofficially) Miss Dania Beach. Its location is in Broward County at 26 degrees 08.605 minutes N x 80 degrees 05.502 minutes West in 71 feet of water. A plaque on shore points to the Bob Derecktor Memorial Reef.

For photos and other information see the facebook page:

No recent sign of Porte St.Louis yet, aside from a sighting in Norfolk VA, we await more news.