Tow parted in storm off Gaspé 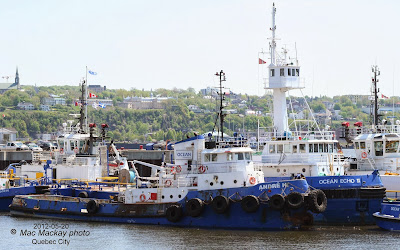 The tug André H the former Point Valiant (i)  ex Foundation Valiant was towing a dredge and two self propelled spoil carriers during Sunday's storm, when the tow line parted off the north Gaspé coast.  In 2 meter seas and 25-30 knot winds, the lighters drifted ashore on the edge of the highway at l'Anse Pleureuse, just east of Mont-Louis.
The tug towing the pair, and possibly a the dredge IV.No.8, had sailed from la Rivière Malbaie Sunday morning headed for Ile-aux-Coudres when they were overtaken by the storm.
The tug is well known for its many exploits with Foundation and Ectug, and was for many years stationed in Trois-Rivières. Recently however it has been doing miscellaneous towing and last year was the standby tug in the ill-fated HMCS Athabaskan tow when Ocean Delta had mechanical problems.[see also Tugfax of today's date for a previous tow gone wrong - you will recognize some of the characters.]
There has been considerable coverage here and in Tugfax on the unique dredge spoil carriers.  Built in the 1930s as paper carriers, they traded from the St.Lawrence through Lake Champlain and the Hudson River to New York. In the late 1960s the ingenious Capt. Borromée Verreault converted them into bottom dumping, self-propelled spoil carriers for his dredging company Verreault Navigation.  They did dual service. In addition to carrying dredge spoil to the dumping grounds, they could also tow and reposition the dredges themselves, without the need of tugs. Using bottom dumping doors, just like a mud scow, they had the advantage of working very quickly because they were self-propelled.
When Dragage Verreault went bankrupt two years ago Groupe Océan bought up the fleet.  They sent André H back to Nova Scotia to tow several of the units to Quebec for rebuild. Past blog postings covered these moves.
Océan refitted at least two if not more of the spoil carriers, giving them a new lease on life - even after 75 years of service in their hulls.
After the grounding, André H headed for safety, I believe in Baie-Comeau.  A tug from Sept-Iles has been sent to the scene to see if salvage is possible. I believe this to be the Ocean Arctique ex Stevns Ocean - also covered in Tugfax this summer when it was acquired in Europe.
Reports of a possible diesel oil spill as a result of the groundings is not surprising, but the St.Lawrence pollution experts SIMEC are also reported to be on scene.
There is no word yet on whether the two craft are salvageable.

See the Radio-Canada footage on the scene:
http://www.radio-canada.ca/regions/est-quebec/2013/12/16/007-gaspesie-bateaux-echoues-anse-pleureuse.shtml

From the TV footage it is clear that one of the grounded spoil carriers are I.V.No.10 ex G.T.D. built in 1936.  and I.V.No.9 ex A.C.D. built in 1937. TheyIt was one of were the boats laid up in Meteghan, NS during the Dragage Verreault bankruptcy. 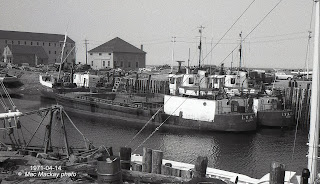 Although little changed in appearance since 1971, two of the I.V. spoil lighters were refitted and repainted by Océan, I.V. No.10 and I.V.No.9.  I.V.No.14 is reported laid up  in Sorel-Tracy unrestored..