As posted last week when CSL Metis called to load gypsum, CSL Americas (at the time CSL International) needed ocean going panamax self-unloaders, and instead of building from scratch, they found tankers in good condition and built new forebodies complete with self-unloading equipment and joined them to the tankers after sections.
This afternoon another of these ship arrived for a very rare visit to Halifax (I have never seen this one here either as far as I can remember).

Built by Tsuneishi ZKK in Numakuma, Japan in 1982, as Janus, the ship was renamed Skaulake in 1992 and in 1992 Cabo de Hornos. When CSL bough the ship in 2004 they renamed it Cabot until the conversion was completed in 2006 when it acquired its present name.
As a tanker the ship measured 40,482 gross tons and 67,208 deadweight.With the new forebody it now measures 45,740 gross tons, 74,517 deadweight tonnes. As with many of the tanker conversions, the ship has a reliable B+W (Mitsui) main engine.CSL provides a spec sheet on their web site:http://www.cslships.com/en/csl-americas/fleet/vessels-and-specs/csl-acadian 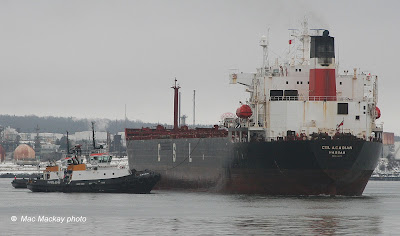 The tugs Atlantic Larch (at the bow) and Atlantic Willow stopped and turned the ship and backed into pier 25-26, where repair crews were waiting to work under the ship's stern.

Update:
The reason for CSL Acadian's visit to Halifax became evident very soon after the ship tied up. It was ballasted down by the bow to expose a portion of its prop, and the above work crews set to repairing or perhaps replacing a blade.(With controllable pitch props, individual blades are replaceable.) 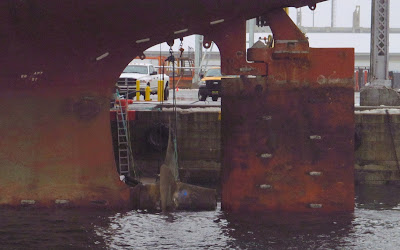 By Monday morning December 23 repairs were complete and the ship went out to anchor to perform tests, and is due to sail later in the day.

Second Update
I now hear that workers were unable to loosen the bolts on the blade, and the repairs were not completed as planned. That is why, despite my several trips past the ship on Sunday, I was unable to see any actual work taking place!
Posted by Mac at 6:41 PM