HS Beethoven - out for repairs

The container ship HS Beethoven put out to sea this evening bound for the repair yard. After three weeks  in port to clean up the mess in its hold from a punctured bunker tank, the ship was finally in condition to sail for a shipyard in Antwerp. 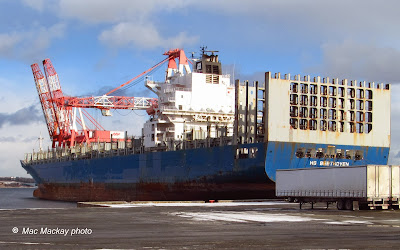 HS Beethoven at pier 36-37 during cleanup operations- on a sunny day (unlike today).

The ship arrived December 2, and was damaged soon after by an errant container. Since them the ship was  completely unloaded of undamaged containers, which were sent on by other ships. The ship then moved to pier 36-37, Halterm, where damaged and contaminated containers were cleaned and removed, and the holds pumped out and cleaned.
The ship is giving a January 2 arrival date in Antwerp. An unladen container ship in the North Atlantic in winter, would be a sight to see from afar - not one I would want to experience first hand.