It was a day for big ships in Halifax and a big day for ships, with several ships arriving despite deteriorating weather. 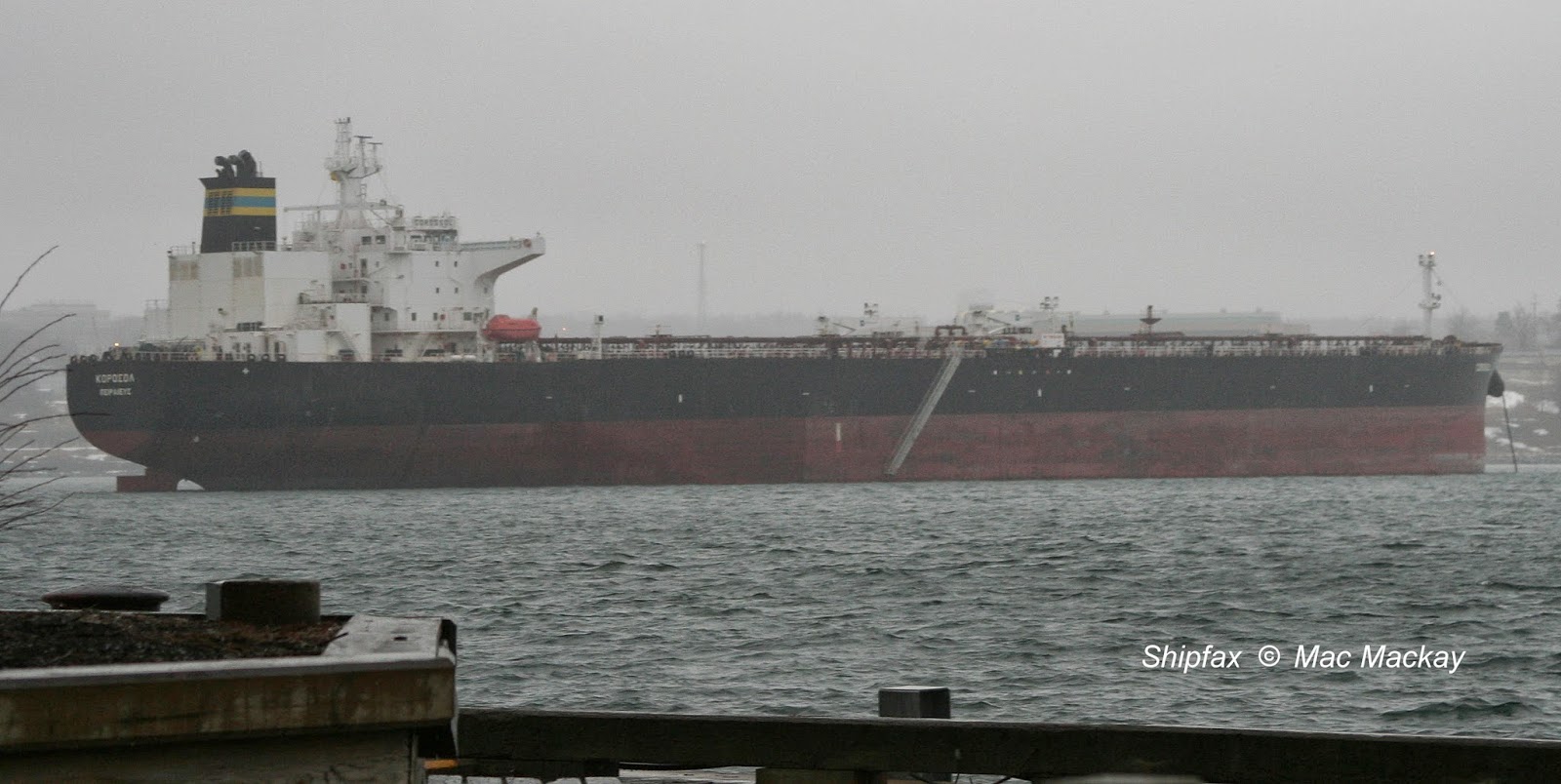 Corrosol brought up at anchorage number 6 on a blustery morning.

The first big ship to arrive was the Greek tanker Corossol, at number 6 anchorage. The 58,418 grt / 106,897 dwt ship is a 2010 product of the Waigaoqiao Shipbuilding yard in Shanghai. It will be here for most of the day for an Asian Gypsy moth inspection by the Canadian Food Inspection Agency. The invasive species from the orient is a risk to Canadian trees. The eggs can survive for long periods on ships, and must be removed prior to entering certain Canadian ports. Once cleared the ship will sail for Whiffen Head, NL to load oil
Corossol is part of the TMS Tanker fleet of some 97 ships controlled by George Economou, Greece's third largest ship owner.
Once at anchor it was met by Dominion Diving's Roseway and the slop barge Dominion Mercury.

The second large ship to arrive is the fully laden Panama flag bulk carrier Hanjin Buchanan . At 63,993 grt / 114,688 dwt, the ship is carrying a cargo of iron ore from Port Carter, QC. Built in 2011 by New Times Shipbuilding of Jingjiang, China, the ship is operated by Hanjin Shipping of Seoul, South Korea.

The ship headed up through the Narrows with the tug Atlantic Oak as stern escort and Atlantic Larch alongside.

The ship anchored in Bedford Basin for a divers inspection for ice damage.

Next to arrive was a now rare caller in Halifax. It was able to reach the Narrows first by slipping along west of George's Island to get ahead of the Hanjin Buchanan. Salarium is a CSL self-unloader on long term charter to Mines Saleines to transport salt from the mine in the Magdalen Islands. At this time of year it often has to find other cargoes due to ice conditions in the Gulf of St.Lawrence.

Salarium approaches the Svitzer dock in driving rain. Steaming up the west side of Georges Island allowed it to get ahead of Hanjin Buchanan..

From 1980, when it was built as Nanticoke, the ship was a regular caller here with grain inbound and gypsum outbound. When it entered the charter and changed its name in 2009 it has been a less frequent visitor.Despite dire predictions about the ship's life span now that it is carrying salt, it seems to be carrying on regardless.

The ship carries the symbol of its charterers superimposed on the typical CSL funnel.It will load at National Gypsum and is due to sail tonight.

Other arrivals, for which weather did not permit photos:
- IT Intrepid returning from a second cable repair job in Newfoundland (believed to have been caused when the bulker John I ran aground in Rose Blanche.)
- Zim Texas at the very exposed pier 42.
- Saudi Abha due at pier 31 late this afternoon to load industrial fabrications and a small fleet of military vehicles.
Posted by Mac at 2:23 PM