Ghost Icebreakers - time to get to work

The three heavy icebreakers currently languishing in Halifax (one suspects until April 1) and one in Quebec City, should really be getting back to work right now. If fiscal year/budgetary restrictions are the sole reason they are sitting there, surely someone in Ottawa can figure out how to move them up a couple of days. (For instance why did they fuel up CCGS Hudson last week when she is not going anywhere until after April 1, but leave the Louis "out of gas"?)
Granted, there was bad weather, but that has now passed. Is there something else going on?

An emergency call for icebreakers on the Great Lakes has diverted three icebreakers from the Gulf and River already, leaving the Gulf to lighter duty craft almost entirely.

Currently CCGS Louis S. St-Laurent, and CCGS Terry Fox are idle at the Bedford Institute in Dartmouth, as previously reported. Louis has used up her fuel for the year, but Terry Fox may be all right for fuel.

CCGS Henry Larsen is still lying at the Dartmouth Coast Guard base today, but was fueled up on arrival Tuesday. 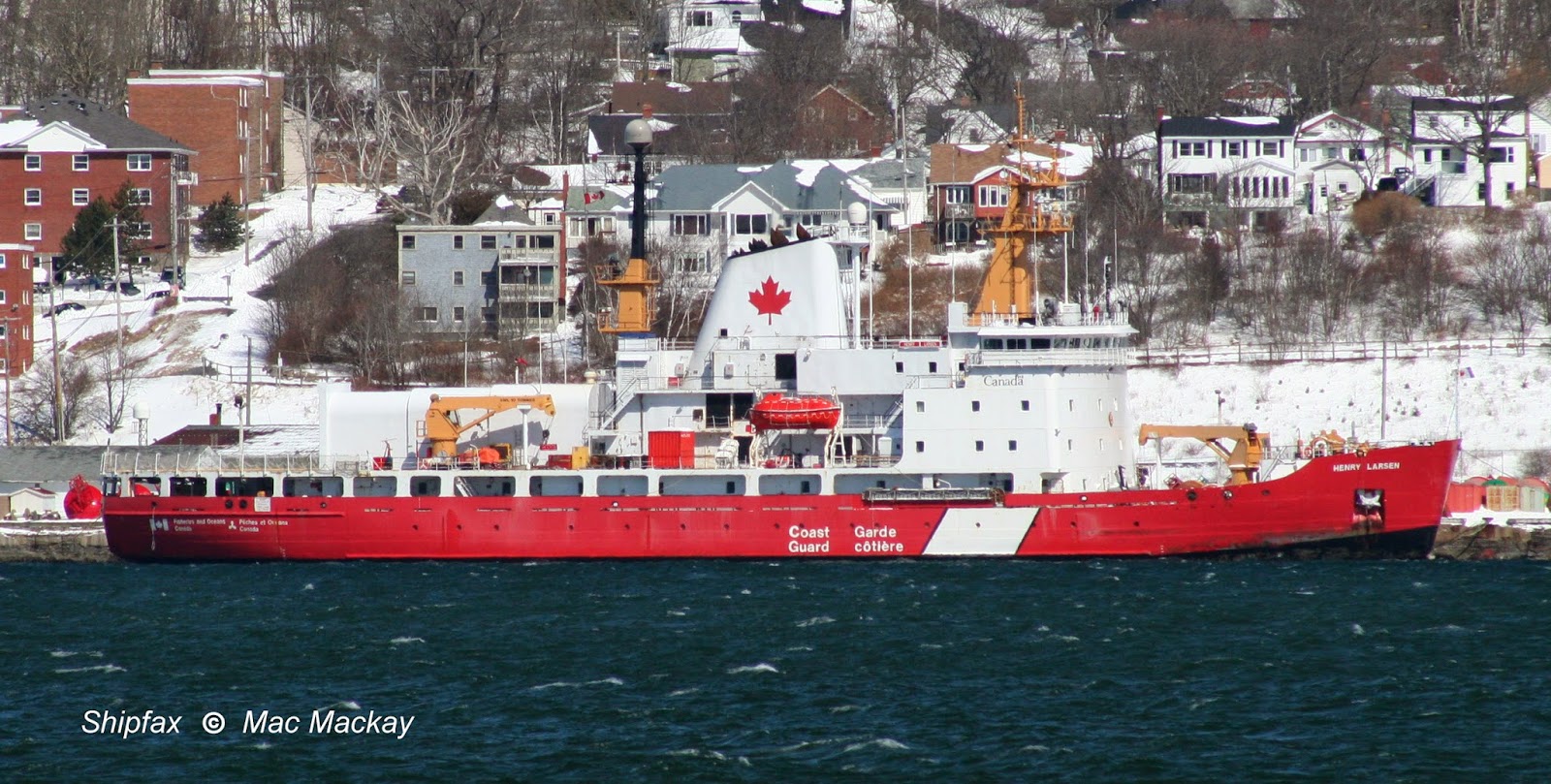 Meanwhile the CCGS Martha L. Black (a light duty icebreaker) from the Quebec Agency has been sent up into the Seaway to break ice in the South Shore Canal between St.Lambert and Valleyfield.

CCGS Pierre Radisson from her Gulf of St.Lawrence station has now transited the Seaway and has passed up through the Welland Canal to break ice at the Port Colborne entrance, where Lake Ontario Erie ice has rafted in to 12 to 14 feet thick by some accounts.

CCGS DesGrosseilliers has been diverted from her Trois-Rivieres station to go up, likely all the way to Lake Superior, to stand in for CCGS Samuel Risley which is of limited use, since she is down to one working engine (out of four), and CCGS Griffon which already has its hands full.

Louis S. St-Laurent is too wide and both Louis and Terry Fox are too deep for the Seaway, so they will remain in the River, Gulf or coast.

Ice maps of the Gulf show the heavy cover of 9/10 over much of the area, with severe conditions on the west coast of Newfoundland and Northumberland Strait. There appears to be an open are now in the Cabot Strait and south of Anticosti, but that could change. This is not to mention the east coast of Newfoundland which after this week's storm could be boxed in for some time to come.

Eastern icebreaking is thus left to CCGS Edward Cornwallis (Northumberland Strait) and Sir William Alexander out of Halifax (in the Gulf), Ann Harvey out of St.John's and George R. Pearkes out of Quebec City. All are 1100 series boats, considered to be light duty. CCGS Earl Grey (in the Gulf) at 6500 kW is slightly more powerful than the 5250 kW of the Type 1100s.

CCGS Amundsen, the only other heavy duty icebreaker is tied up in Quebec City. How come?

Certainly mysterious in the worst ice season in years when all the big icebreakers are tied up. To quote the immortal words of the theme to Ghostbusters "something strange goin' on - who you gonna call?"


P.S. to the above - I guess I scared them. After this was written but before it was posted, CCGS Henry Larsen sailed. Last seen on AIS she was heading northeast at 16.5 knots,. The ship is likely returning to the Cabot Strait where it was last working.
And on Friday morning, Terry Fox got away from BIO and went to Imperial Oil to fuel. 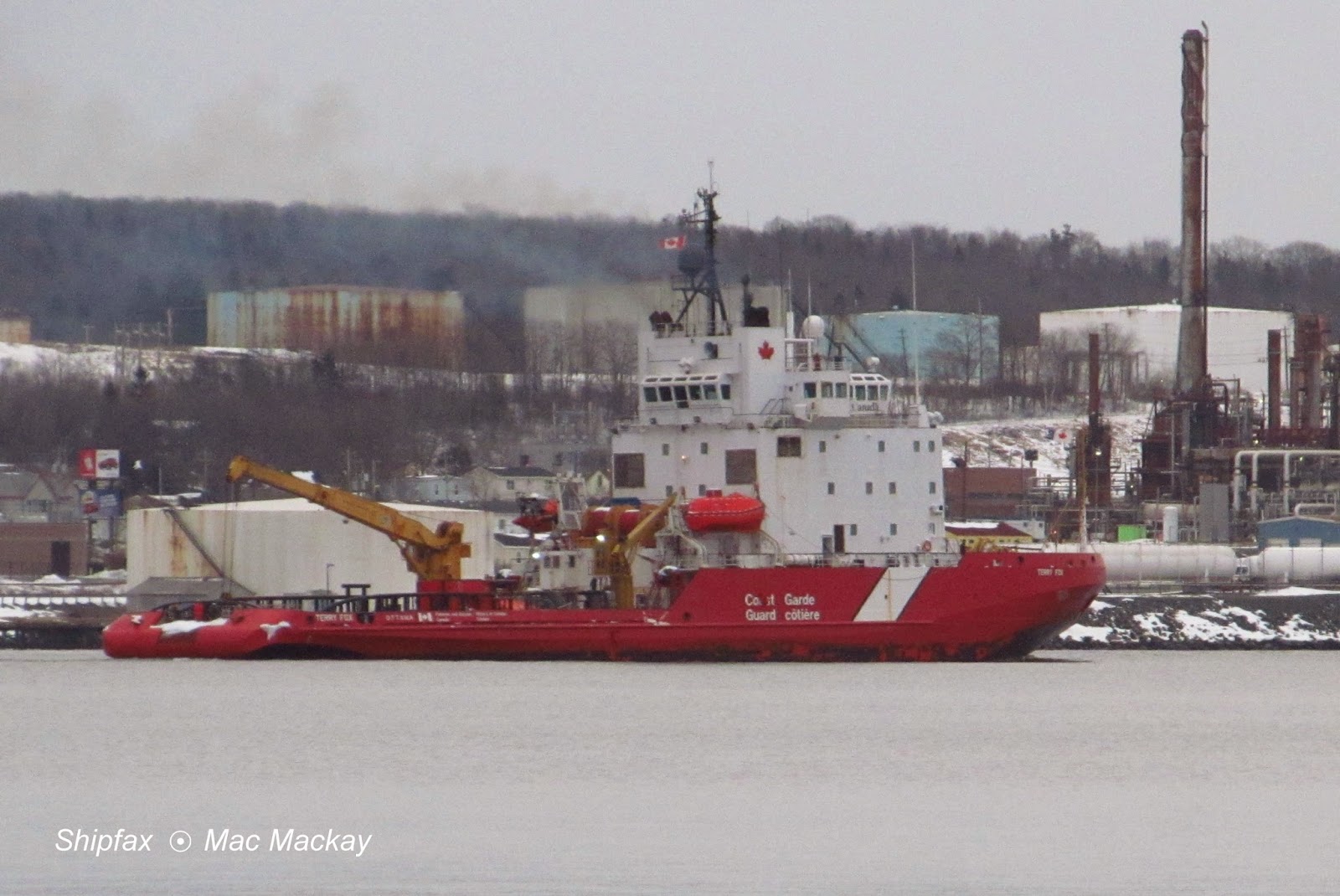