There was a lot of activity in Halifax this Monday, so instead of a number of different postings, this roundup will summarize the more interesting ones.

Another Spliethoff ship called in Halifax today. This time it was one of the smaller type of ships of the ten ship A class. Admiralengracht dates form 1990 and measures 7,949grt, 12,150 dwt. It is fitted with three 40 tonne cranes and as with all Spliethoff ships, can carry a variety of cargoes
It tied up at pier 37, an unusual pier for general cargo, since it is within the Halterm container terminal, but one that is often used for "one of" or military cargoes. I have since learned that the ship was in fact filling in for Fusion- see below.


Atlantic Oak assists Admiralengracht in getting away from pier 37 this evening.
The distinctive green containers on deck do not belong to any regularly scheduled container line calling in Halifax. Also last week I spotted some military vehicles in the pier 37 area, and they may have been loaded too.

Military vehicles on pier 37 March 10. This were in fact exported on a Zim ship earlier in the week
While in the area, it is worth noting that Fusion is still sitting idle at pier 36, perhaps undergoing repairs. The ship was towed in on March 11 and unloaded, but has not loaded any cargo. There were a couple of tank trucks on the pier the other day, but they appeared to be fueling the ship. 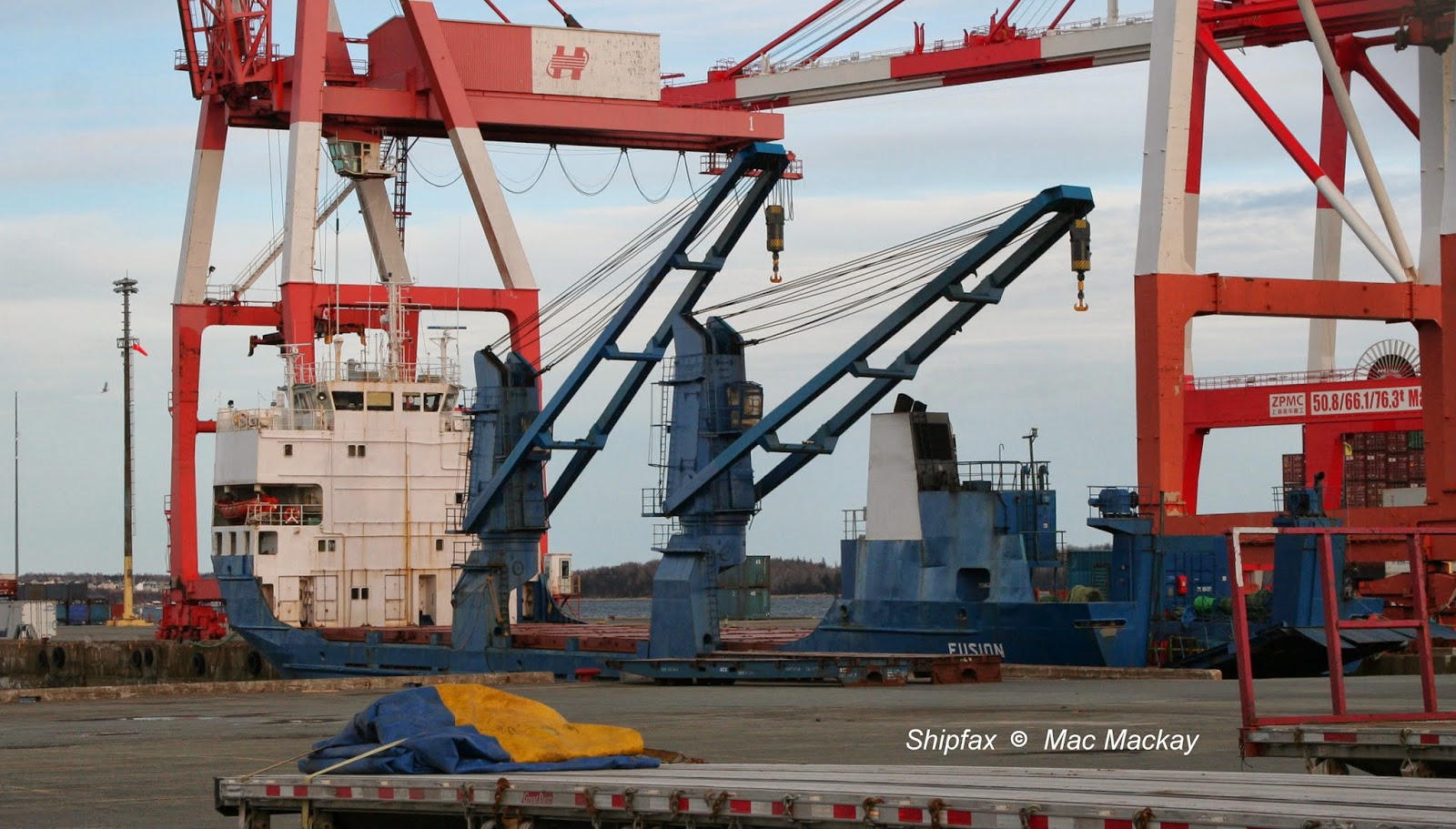 As mentioned the ship is owned in Odessa, Ukraine, and one hopes that it is not caught up in the present unrest of that country.
At nearby pier 31 the Cyprus flag Seattle is offloading nickel sulfides from Cuba. It is not a usual Nirint ship, but has a larger capacity than those ships, so perhaps has been called in to make up a backlog. 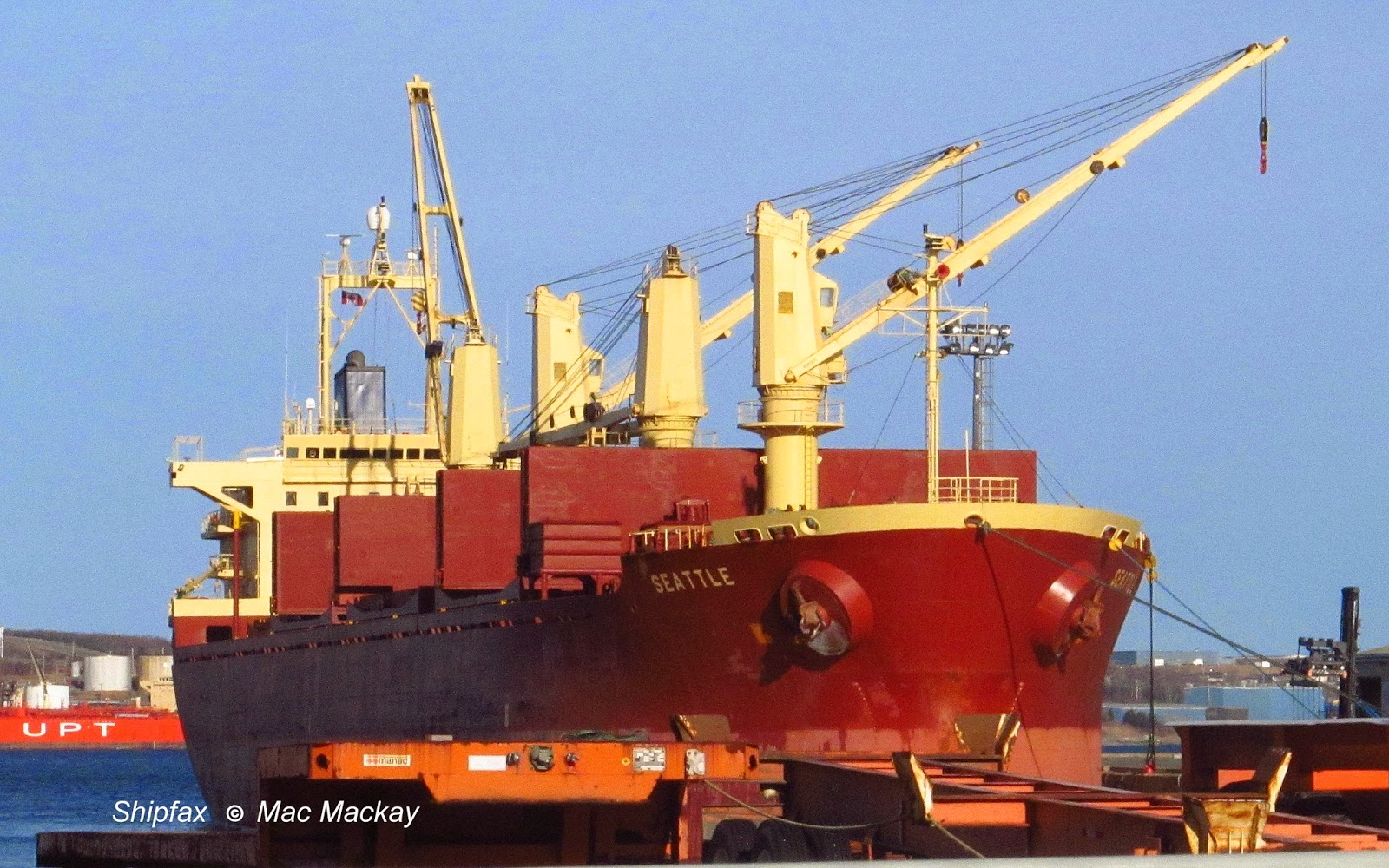 Built in 2000 by Saiki Heavy Industry of Japan it is a bulk carrier of 19,743 grt, 31,923 dwt and carries four cranes, which it is using to discharge. The ship carried the name Stornes from 2000 to 2004, and UBC Seattle until 2004.
Other updates:
Peresenk - completed prop repairs, and is bunkering and will sail this evening.
Pioneer -   work is still underway on the prop hub.
Beverly M 1 tug, was finally able to sail today with the Derrick#1 for St.John's, NL. They held in port to avoid bad weather,. They must now skirt ice to reach their destination.
The tanker Cape Brasilia  finally made it into Imperial Oil dock 4 today. It first arrived off Halifax March 4 from Houston. It had to put back out to sea at least once due to weather, but finally came in last night on departure of Energy Pride. 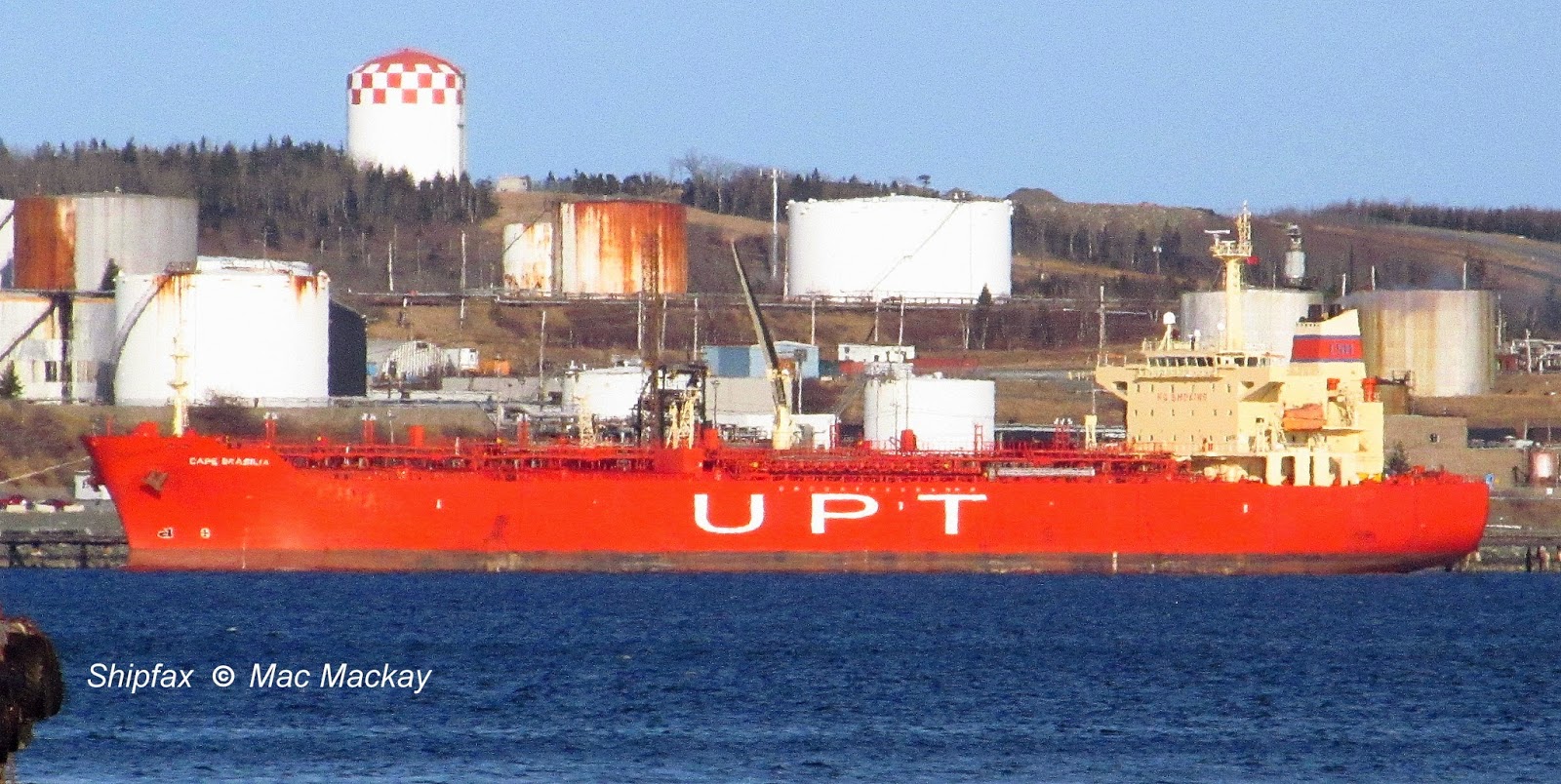 Built in 2006 by Hyundai Mipo in Ulsan, South Korea, it is a chemical product tanker of 25,108 grt, 40,327 dwt. It is owned by Columbia Ship Management of Hamburg, Germany and operates under the UPT pool, whose brilliant hull colour it wears. A fairly standard looking ship, it does have an unusual reverse rake funnel cap.
.﻿
﻿
﻿
﻿
﻿
Posted by Mac at 8:42 PM