Faced with a large over-capacity in container ships and the resulting depressed state of container shipping in general,  the world's three largest container lines Maersk (15% of trade), MSC (13%) and CMA/CGM (8%) decided last year to pool their ships into one service called the P3 Network. Longstanding competitors, the three lines desperately need to lower costs to survive, since they have ordered so many giant (but efficient) ships, with not enough cargo to carry. By inference of course they also want to drive smaller operators, with smaller (and less efficient) ships out of the market too.

To keep regulators happy the P-3 stated that they would still run their businesses independently, but only pool the ships. So far US regulators have approved the proposal, but only as it applies to US ports. China and the EU have yet to weigh in. The latter has a 30% market share cap on shipping consortia, which the P-3 likely exceeds. In fact it is nearly a 40% share, which would effectively be a monopoly by many definitions.

Three separate trade routes are involved: Asia-Europe (via Suez), Trans-Pacific and Trans-Atlantic. With the US approval it seems likely that changes will be made on the Atlantic before the full service comes into play sometime mid-year. This may well effect Halifax and Montreal.

Maersk currently serves Halifax and Montreal with a direct transatlantic service. The latter port is  inaccessible to the giant Maersk ships, but Halifax is. 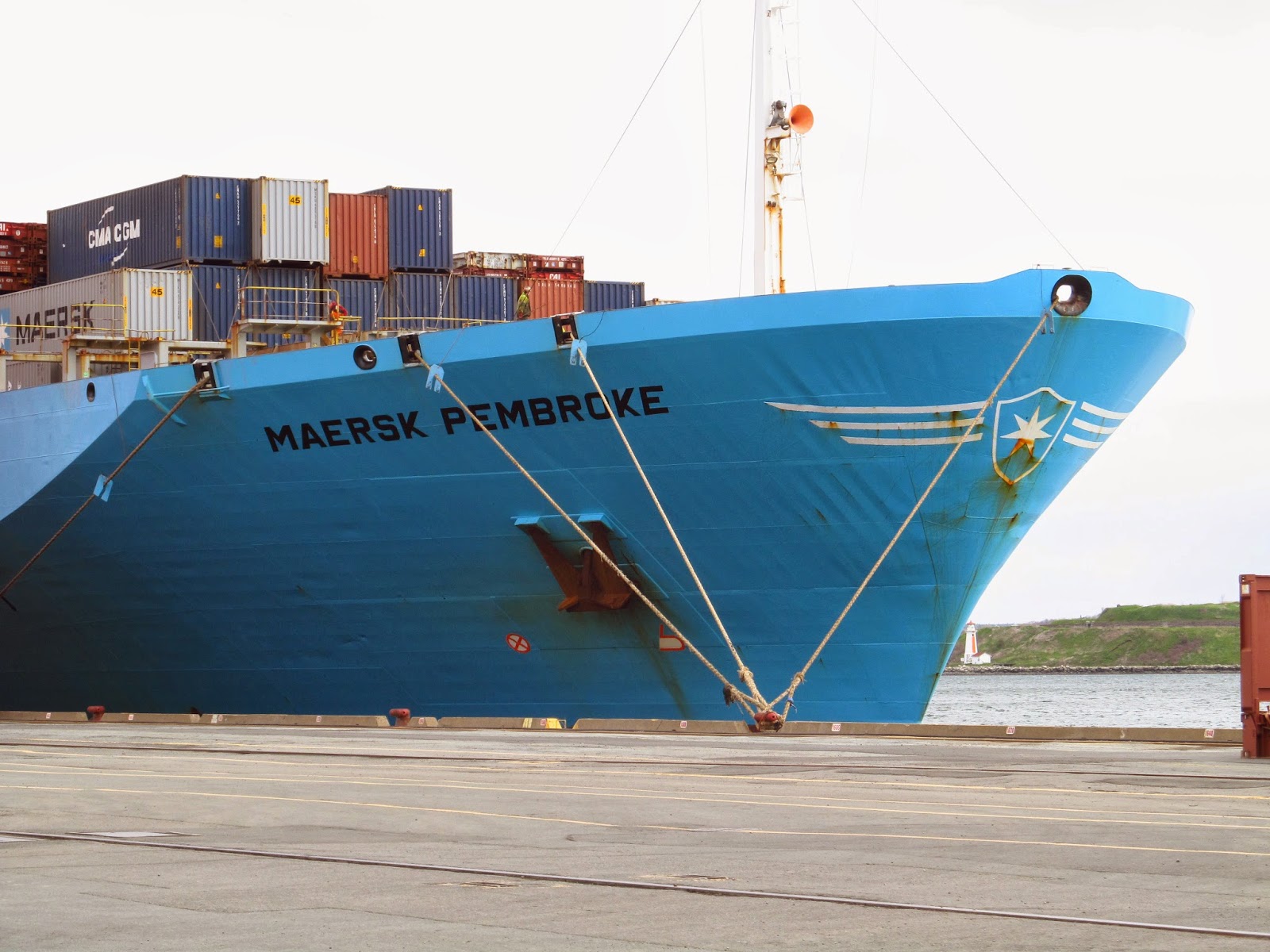 Maersk Pembroke is one of the Maersk ships that serves Montreal westbound and Halifax eastbound on a weekly transatlantic service.

CMA/CGM did serve Halifax with its own ships, but has been using slots on Maersk ships for more than a year. (see photo above)

MSC operates a feeder service from Montreal and Saint John, NB to the Dominican Republic, which connects with other MSC world services.

Are bigger ships on the way for Halifax? Certainly the two container terminals are ready for larger ships, but will they come?

If they do, will they bite into the trans Atlantic services of other lines?

G6 Alliance - maybe, even though G6 members HAPAG-Lloyd and APL use a significant number of post-Panamax ships they are still less efficient than the new P3 giants


Zim Tarragona at3500 TEU is considered to be a small and inefficient ship.

Zim - maybe, because they use smaller ships, which are considered to be inefficient in today's terms. The Port of Halifax's largest container customer has been in a vulnerable position for some time.

Several lesser players such as Nirint and Melfi - probably not since the call in Halifax en route southern Europe to Cuba.

Meanwhile HAPAG-Lloyd has come one step closer to sealing its deal with the Chilean CSAV, wherein CSAV would become HAPAG's largest shareholder. The merger (some would say takeover of HAPAG) will also include financing for seven new 9300 TEU ships-not exactly the formula one would expect if they are trying to reduce capacity. It will however see the disposal or transfer of smaller ships.
The merger would also see HAPAG + CSAV become the fourth largest container line, edging ahead of CMA/CGM.