It is time for another rant on the subject of cabotage. If you've been ignoring me on this topic, here is the gist of it. Cabotage is essentially trade between ports within the same country- also called coasting. Most nations have regulations on cabotage, often restricting such trade to ships belonging to that country.

Perhaps the most extreme form of cabotage law exists in the United States and forms part of the Jones Act. To trade between US ports, a ship must not only fly the flag of the US, it must be owned and built in the US and must have a US crew. There is much more in the Jones Act than that, which was originally enacted to protect US shipbuilding and ensure a sufficient number of ships and crews to respond to national emergency, in case of war, etc.,  Exceptions have been made, but generally it takes an Act of Congress.

Canada's cabotage law is fairly simple- to trade between Canadian ports, the ship must fly the Canadian flag.
Exceptions are made by the Minister of Public Security when no "suitable" Canadian ship is available. The result is that specialized ships such as those used in offshore petroleum work are routinely given coasting licenses since there are no Canadian ships that can do the work.  It does beg the question of whether suitable Canadian ships would be found if Canadian waters were closed to foreign ships. Would Canadian owners have the courage to get into the business and be competitive world wide?

Sophisticated applicants can tailor the type of work to ensure that even if a Canadian ship were available to do some of the work, no Canadian ship could do all of the work. A recent case in point was the coasting license given to the Russian ship Akademik Sergey Vavilov for a combined pleasure cruise and research voyage in the high Arctic. The Canadian icebreaker Polar Prince (ex Sir Humphrey Gilbert) could have done some or most of the work but. not the luxury cruise part, so the Russian got the coasting license. 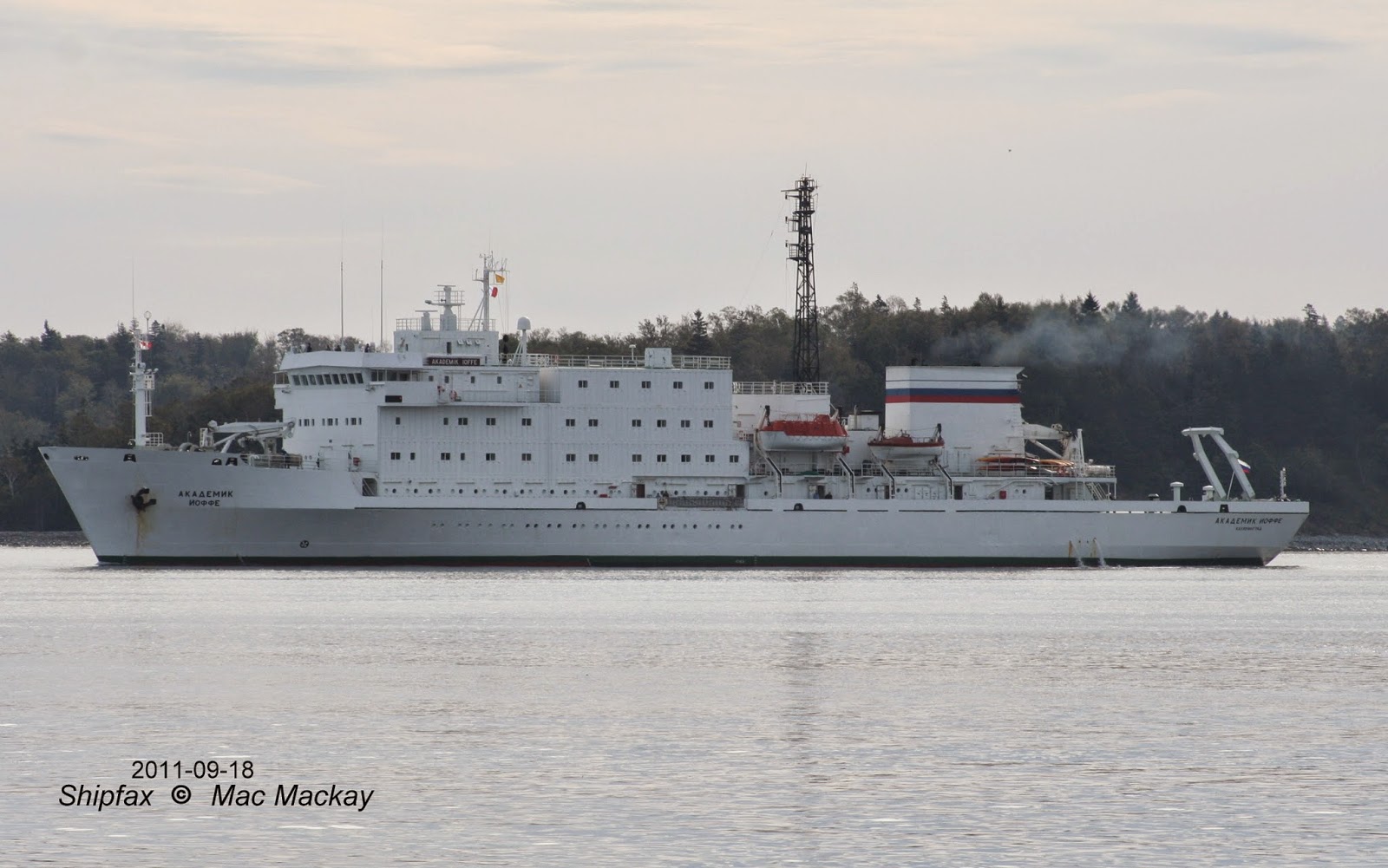 Akademik Ioffe, sister of Akademik Sergey Vavilov in Halifax in 2011.

Tanker companies have also skilfully played the coasting license game by keeping the number of Canadian flag tankers to the economic minimum possible level, and calling in a foreign ship when all the Canadian ones are busy. This scheme ensures that no Canadian tankers are ever idle for want of work, and that is good for the bottom line. Since Canadian flagged ships are not competitive in international trade, they are kept at work within Canadian waters, and that is also good for the bottom line. However there is another line, and that is the fine line where the market could support another Canadian tanker. Algoma Tankers recently decided that the line had been crossed and brought the tanker Algoma Hansa under Canadian flag permanently. Built in the US, it had been trading internationally under foreign flag and could have been issued a temporary coasting license for short term work-even up to a year, but there was apparently enough longer term work that it was worth bringing the ship into Canadian registry permanently.

Not so clear is the case of  Espada Desgagnés. Earlier this year Transport Desgagnés' tanker subsidiary Pétro-Nav formed a new company with Valero (Ultramar) to transport Alberta tar sands bitumen from Montreal to Lévis, QC, starting in the fall of 2014 when the existing pipeline to Montreal is converted from gas to crude oil. They acquired two very nice foreign tankers and renamed them Espada Desgagnés and Laurentia Desgagnés. Since the ships were not needed until autumn, they were immediately flagged out to Barbados on a charter through an associated offshore entity. (Many Desgagnés dry cargo ships are flagged out foreign for up to half of the year when they are not needed in Canadian coasting work.) 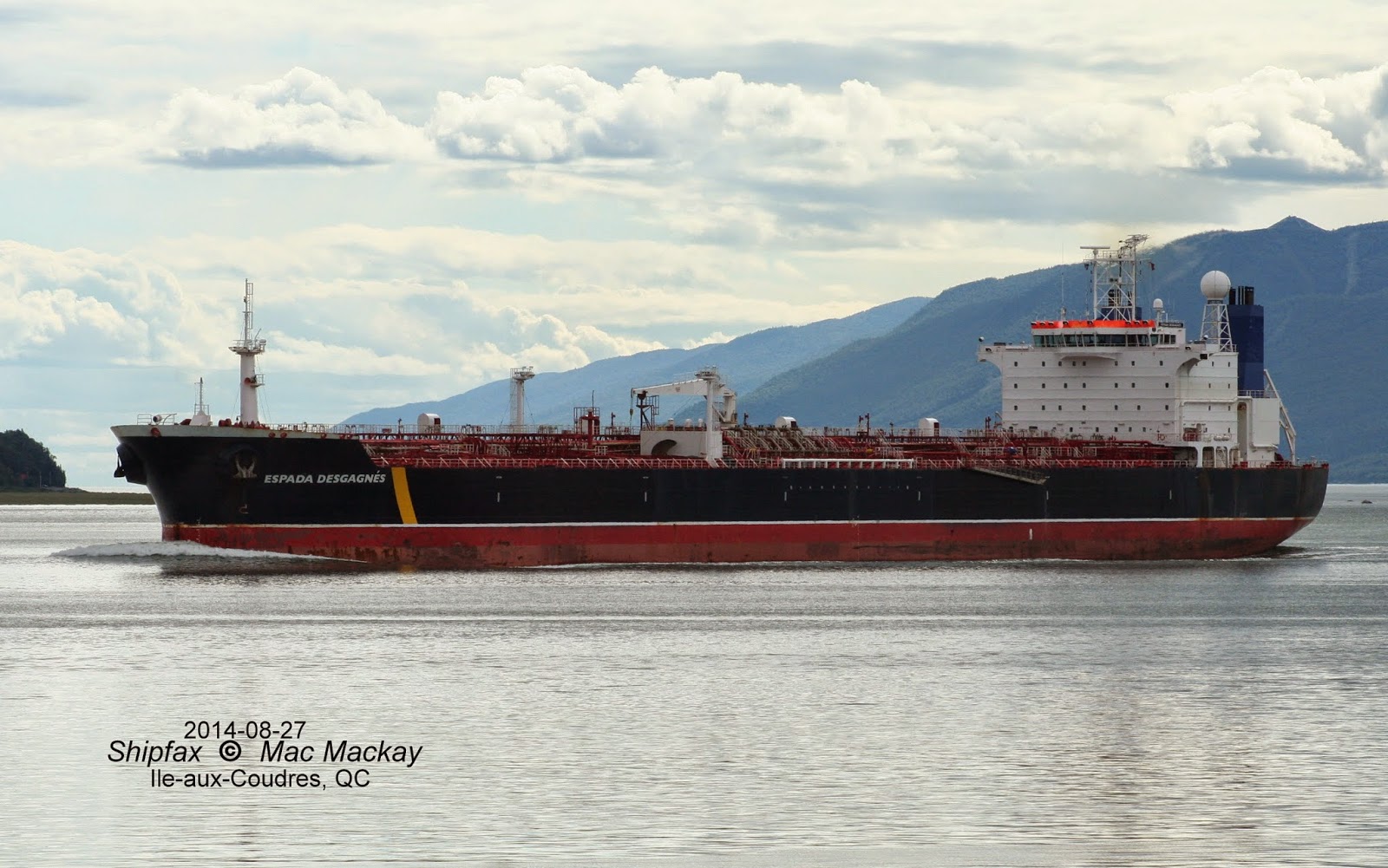 
However, Espada Desgagnés, was granted two coasting licenses this summer to work as a depot ship in the high north, since no Canadian ship was available. Its work was to take fuel from Valero in Lévis to Diana Bay. At anchor there it would dole out the fuel to smaller tankers for delivery to northern ports. This would save the smaller tankers from having to return all the way to Lévis for each load. Having such a large ice class tanker available, which no other company had, ensured that a coasting license was readily available. However Pétro-Nav is a Canadian company, with (presumably) a fully qualified Canadian ship, but is allowed to have it working in Canada under foreign flag, primarily because it has figured out how (and perfectly legally I guess.) 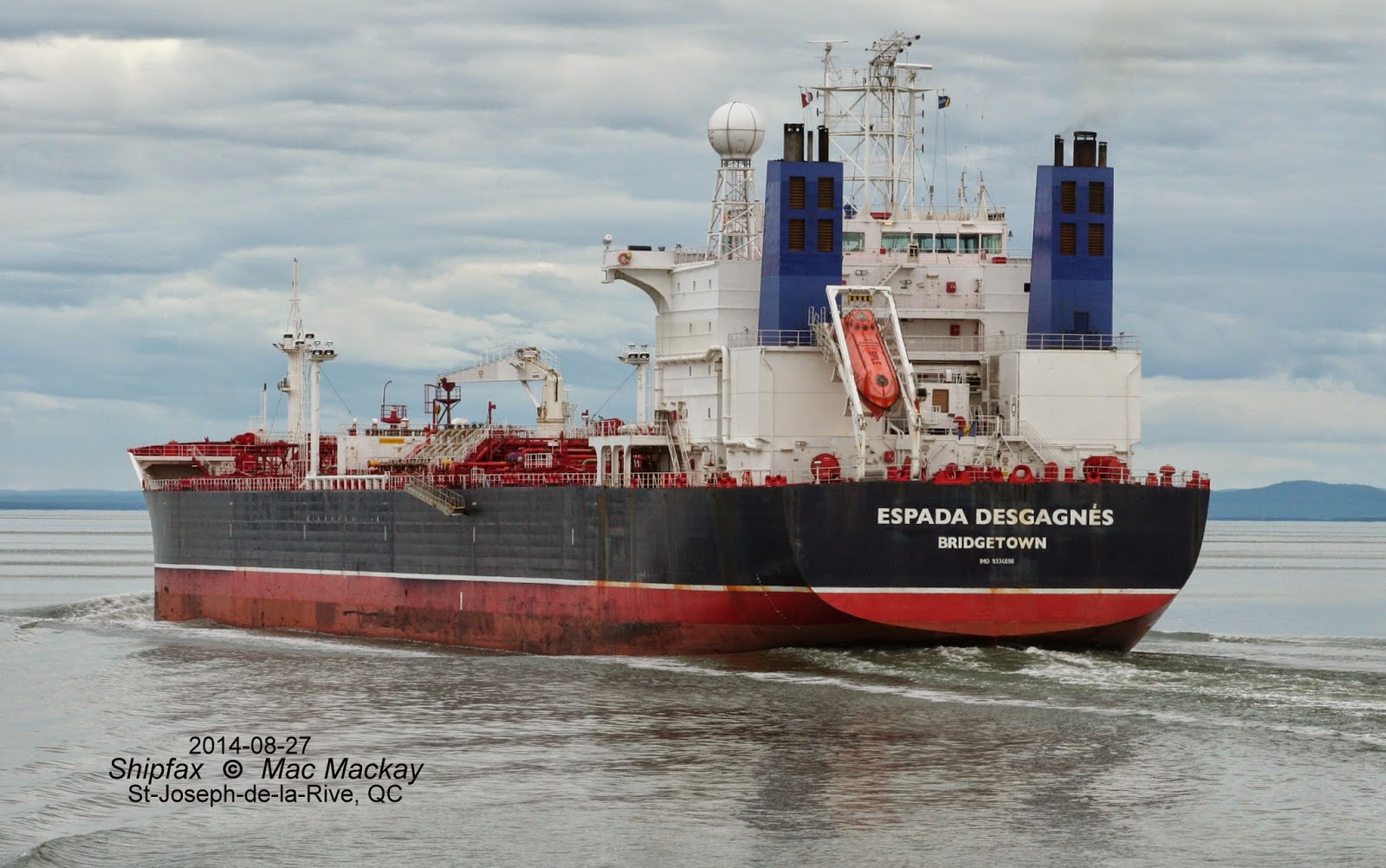 ... proudly flying the flag of Barbados.

So Canada's cabotage laws may not be perfect and they may be dodged by skilful operators and they may perpetuate high operating costs. That's not to say that they couldn't be improved, or that Canadian ship owners couldn't become much more competitive worldwide if given sufficient regulatory encouragement at home.

Now we are faced with a new development. Our federal government, which has any uncanny nack for enacting policies that no one has asked for (need I mention the elimination of the long form census among the hundreds of others?) has suddenly decided that Free Trade with the EU is essential to our future. This is largely a matter of spite for the US not granting us a route for another oil sands bitumen pipeline. Also famous for throwing out the baby with the bath water, the negotiators have apparently decided that cabotage is a bad word (if they understood it) and that it can be sacrificed to make the politically important deal.
Ships of any nation - no matter how disreputable are able to trade freely between and within EU countries - so that should be good enough for Canada.

If this comes to pass what could it mean?

1. Overnight, Canadian shipowners will flag out their ships to flags of convenience if they want to remain in business.
2. Owners will fire hundreds of Canadian seafarers, with the loss of well paying jobs (and a source of Canadian income tax) and hire third world crews at a fraction of the cost.
3. The Canadian shipowners will also re-incorporate offshore and will not have to pay a cent of Canadian corporate tax.
4. New foreign operators will appear on the scene with sketchy ships and sketchier lines of responsibility.
5. Canadian ports will begin to host substandard ships that have been detained for deficiencies to safety standards or even abandoned - including their third world crews. Expect more accidents and groundings too - see recent European history where undermanned and substandard ships figure in most shipping incidents.
6. Canadian shipbuilding, which was sacrificed at the altar of defense procurement, is largely dead anyway, but this will ensure that resurrection is never possible, short of a miracle.
7. The cost of transporting goods between Canadian ports may go down, but not much, since incoming foreign operators will only have to compete with each other. Can you imagine the reaction from the Longshoremen when the first foreign flag coaster arrives?

Is this what anyone wants?

Why not instead bring Canadian shipping into a more competitive position world wide?
It is impossible to level the playing field, but why must we try? Just because the EU allows it why must we? It is too much to give up sovereignty of our own waters.Our government is obviously just buying its way into the EU, not negotiating as equals and playing hardball.
To make Canada more competitive would require some clever thinking about a Canadian offshore registry (we are close to having it with Barbados now), and some creative work with seafarers and immigrant workers.
Some other Canadian sacred cows such as dairy marketing boards (pun intended) and inter-provincial barriers would be far better things to give up, than gutting Canadian cabotage laws.

Watch this story because it is flying well under the radar of most Canadians and most politicians who are geographically challenged by distance from navigable waters.