Trailblazer gone to the beach

The recent parade of gypsum carriers to the scrap yard isn't over yet. With CSL International and its pool of ships upgrading with new or newer ships, the old familiar faces are fast disappearing. In recent months Ambassador and  Pioneer and others have been sent to the scrappers.

The latest to go the beaches of Alang, India, is CSL Trailblazer, familiar to older Halifax shipwatchers as Gold Bond Trailblazer, however its story is intertwined in an interesting way with the better known Colon Brown.

Built in 1974 by Sasebo Heavy Industries in Japan, Colon Brown was the second generation of the revolutionary deep-sea self-unloaders pioneered by Ove Skaarup, starting with Melvin H.Baker in 1956. Built as gypsum carriers, they were chartered to National Gypsum, and were frequent callers to Halifax in the boom years for gypsum. Colon Brown was less than a year old when it sailed from Halifax in April 1975, fully loaded, and heading into extreme weather. Just off Halifax, the decision was made to come about and return to port. In doing so however, the ship was severely damaged and began to take water.

It was a near thing, but the ship made it inside Meagher's Beach and was purposely run ashore in Macnab's Cove to prevent it from sinking entirely. With decks nearly awash, and the hull severely twisted, the ship was saved along with all aboard her. 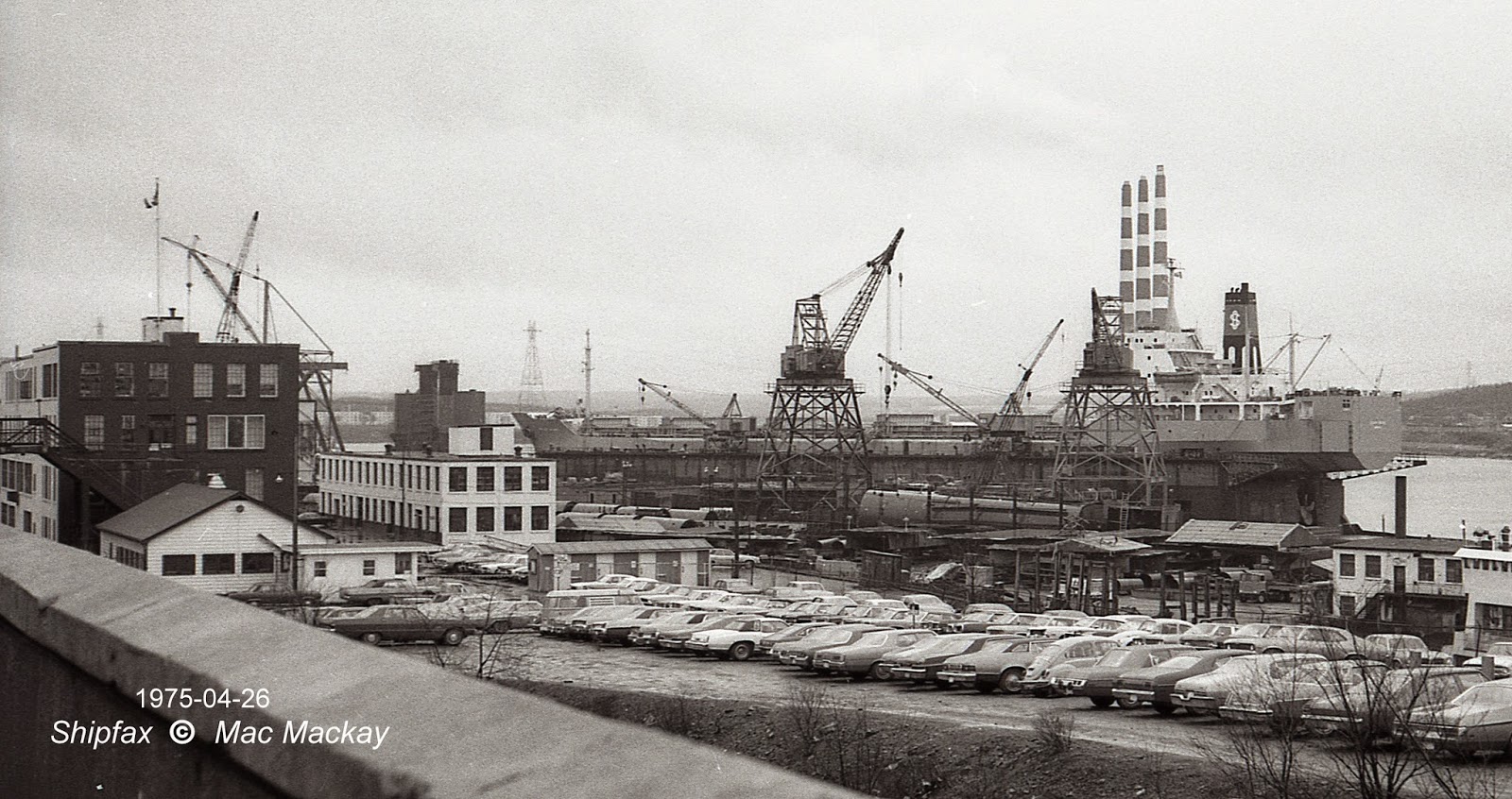 Colon Brown in the floating drydock Lionel A. Forsyth at Halifax Shipyard for temporary repairs following the intentional grounding. The ship's bow and stern extend beyond the ends of the dock.

Remarkably the ship was patched up enough to return to Japan to be rebuilt. When it got there, a new mid-body was installed and the ship sailed again in 1976 as Gold Bond Conveyor. With the original bow and stern, the ship returned to service carrying gypsum out of Halifax.

On March 13, 1993 it sailed fully loaded from Halifax and headed into the "storm of the century" and was soon in trouble again. Heavy seas collapsed hatches forward and it began to take water. Although aircraft and ships were dispatched to assist, the weather prevented them from aiding the beleaguered vessel and the erstwhile rescuers watched helplessly as it disappeared from radar March 15, 180 miles south of Cape Sable Island, with its entire crew of 33.

The mid-section of the former Colon Brown, although damaged in 1975, was rebuilt and  used in the construction of another ship, named Gold Bond Trailblazer which was completed in 1978. Some design changes were made in the new ship however, and its superstructure was built with one less deck. Later ships, such as Georgia S . (also now gone to scrap) were built with a higher bow to shelter the number one hatch.

All the Skaarup ships had a totally enclosed self-unloading system, discharging through the stern by means of extendible conveyors from side doors. 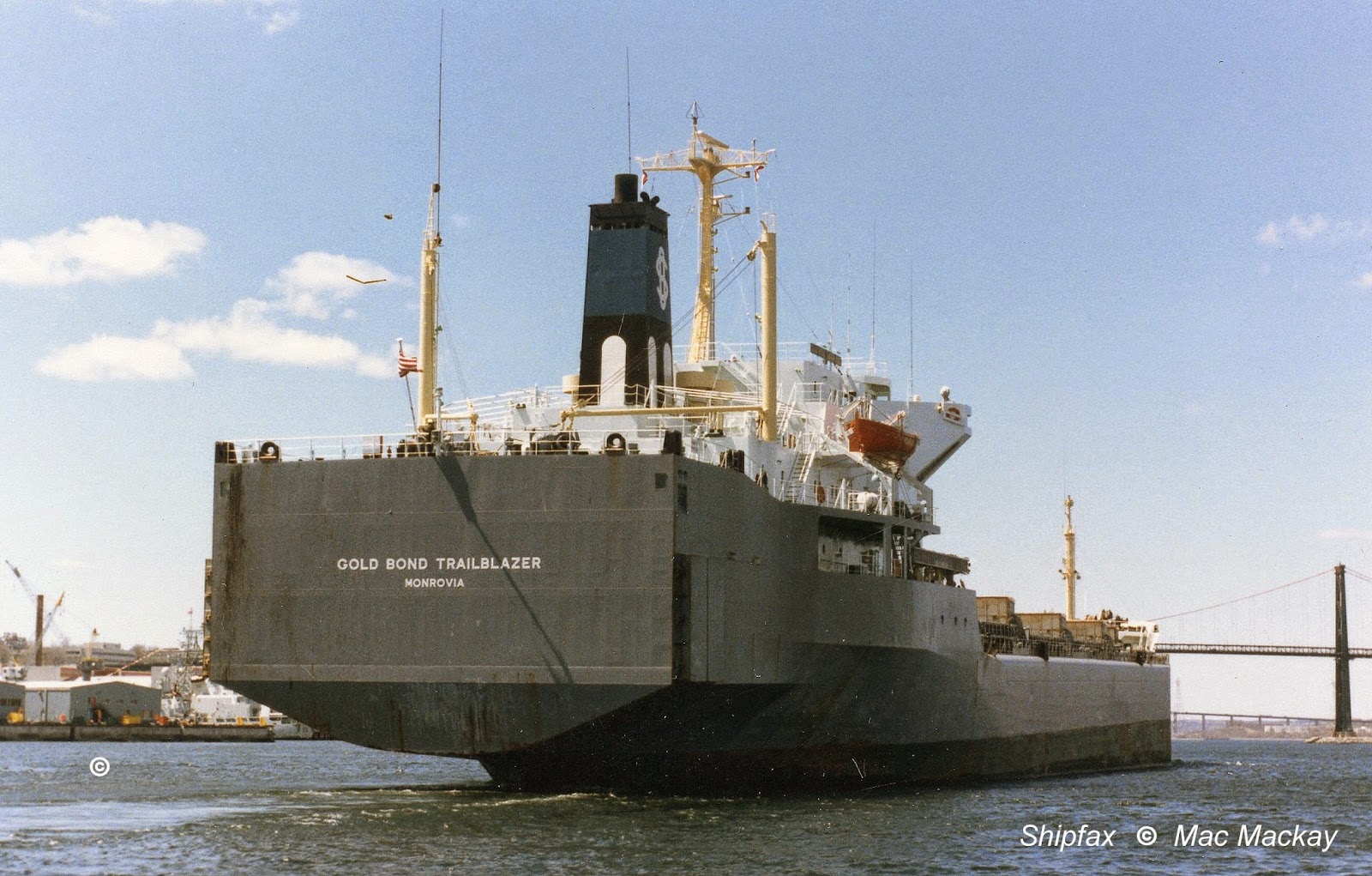 The large projection on the stern housed the transverse unloading conveyors, which were concealed behind doors while at sea, but extended outboard for unloading in port. Could uplift from following seas, or damaged doors have been a factor in the the loss of Gold Bond Conveyor?

When CSL took over the National Gypsum contract from Skaarup Shipping, they bought Gold Bond Trailblazer which had become surplus, and renamed it CSL Trailblazer in 1998. Although I don't believe it appeared in Halifax under that name, it  worked for CSL on the west coast carrying aggregates and in the Caribbean/Gulf region with sand and phosphate rock.

Now the Trailblazer is history, and with it, part of the Colon Brown, which survived its ill-fated "parent" by 21 years.