Container business in Halifax is down, but that is as a result of the current national and world economies. All the lines are still calling here, but are scrambling hard for more business or more economies in operation. .

The world's two largest lines have overbuilt and capacity exceeds demand. In order to achieve more efficiencies, they have come up with a plan. A.P.Moller (Maersk) and MSC (Mediterranean Shipping Co) have managed to convince regulators in Europe, China and the US that a ten-year VSA (Vessel Sharing Agreement) is not a merger, a monopoly, or a threat to other operators. Therefore it will come into effect in January, involving 185 ships on 21 strings on Asia-Europe, Trans-Pacific, and Trans-Atlantic routes. There will be five strings on the Trans-Atlantic alone.
Known as the 2M it replaces the P3 which had included CMA CGM, but which was rejected by China earlier this year. One difference is that the P3 would have had joint management, and was deemed to be an effective merger, at least by China. The new 2M is supposed to have only a small coordinating office, with both Maersk and MSC operating independently. How this will actually work is a mystery, since the lines use different terminals in most ports and have somewhat incompatible practices.

Halifax appears to be fairly immune to direct impact from this new VSA, but there may be fall out. 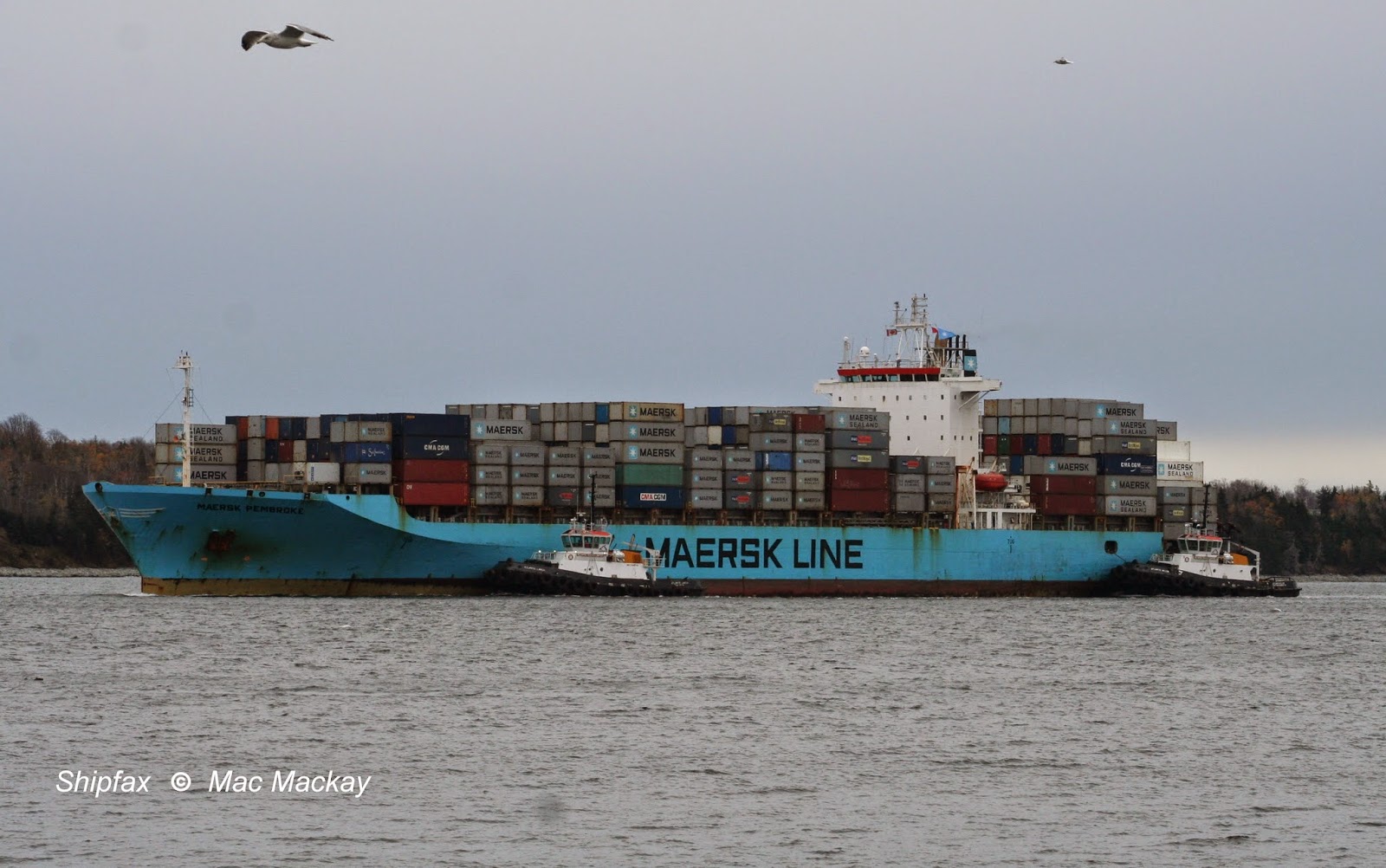 Maersk Pembroke arriving this morning from Montreal is one of four Maersk and one CMA CGM ships on the TA-4 service.

Maersk has let it be known that their TA-4 (Transatlantic 4) service from North Europe to Montreal, Halifax and return, will remain, and not be included in the VSA. However it is possible that the bumping of mid-size ships may result in different ships on the TA-4. Maersk has a sharing arrangement with CMA CGM, which  provides one ship on the five ship rotation. 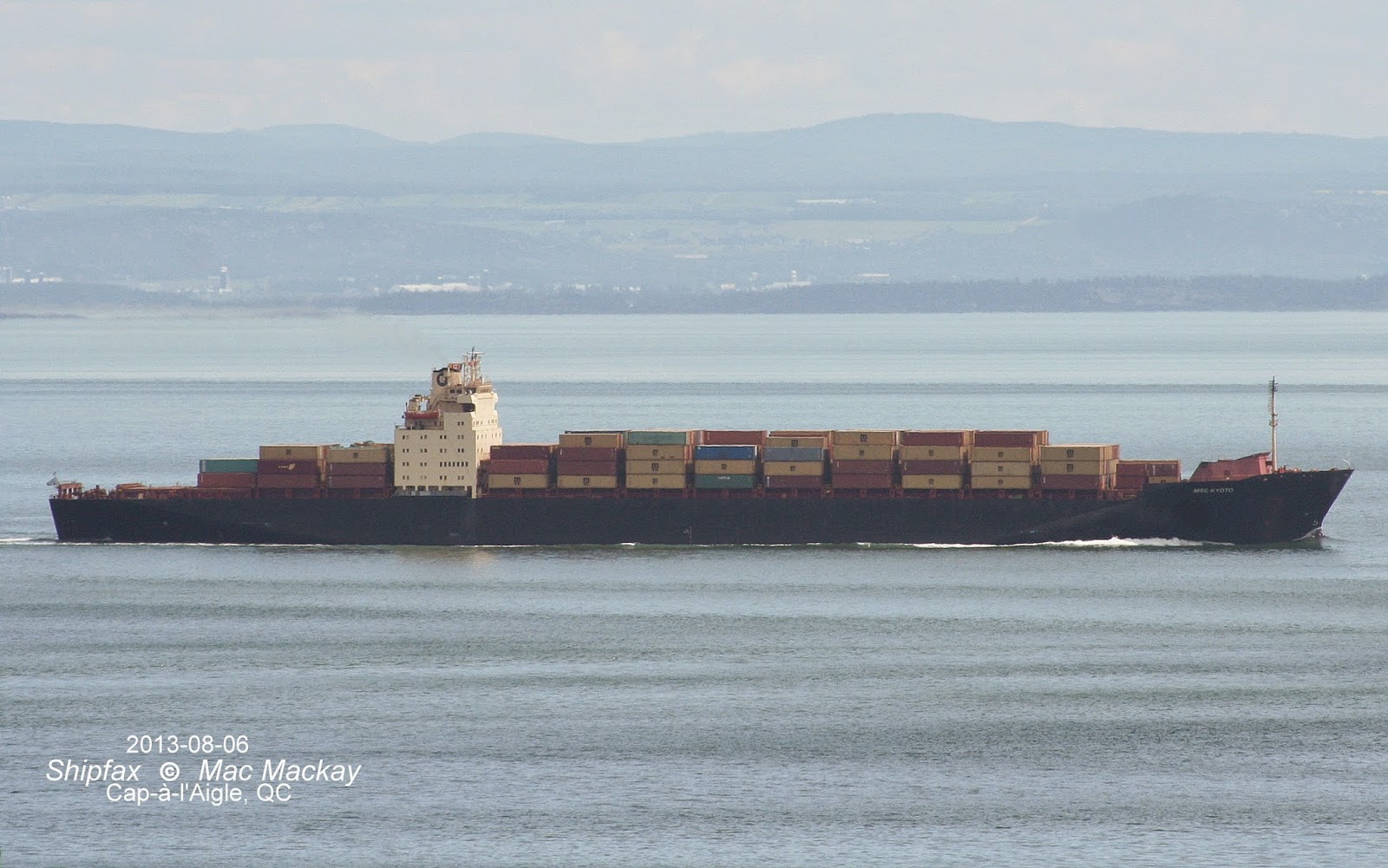 The 22 knot MSC Kyoto at speed on the St.Lawrence in 2013.
Built in 1981 as Lexa Maersk it was lengthened in 1984, then sold to Costamare and renamed Maersk Tokyo in 1997 and MSC Kyoto in 2007. It was scrapped in July of this year.
It operated on MSC's Caribbean service.

MSC does not call in Halifax, but has two services to Montreal. SLSC1 (jointly with HAPAG-Lloyd and OOCL) and an independent service from Montreal to the Caribbean that calls in Saint John.
They will not be effected likely because their ships have a high ice class and were built for the route, altough MSC has been known to put odd ships on the run. 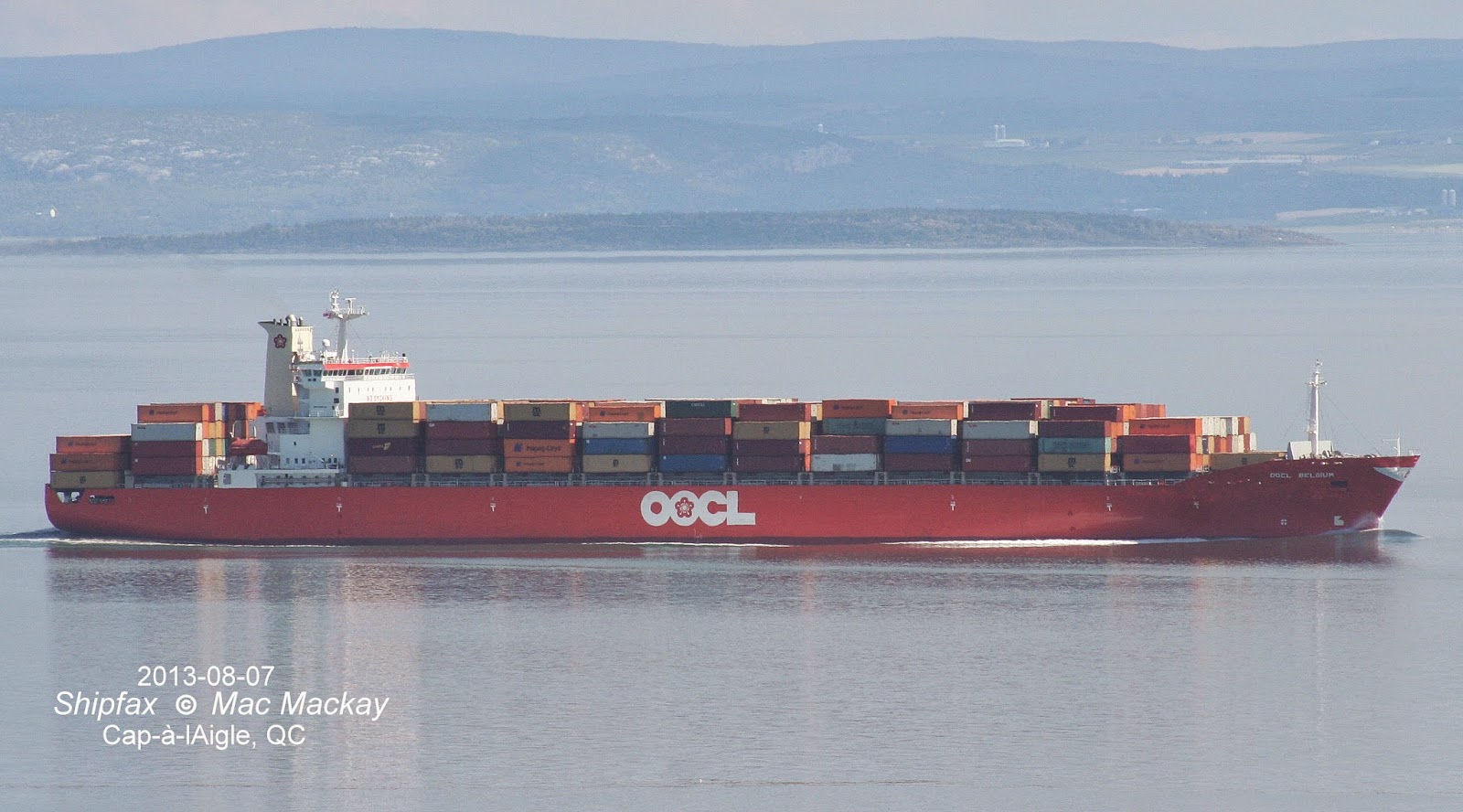 OOCL Belgium was built for the St.Lawrence service. 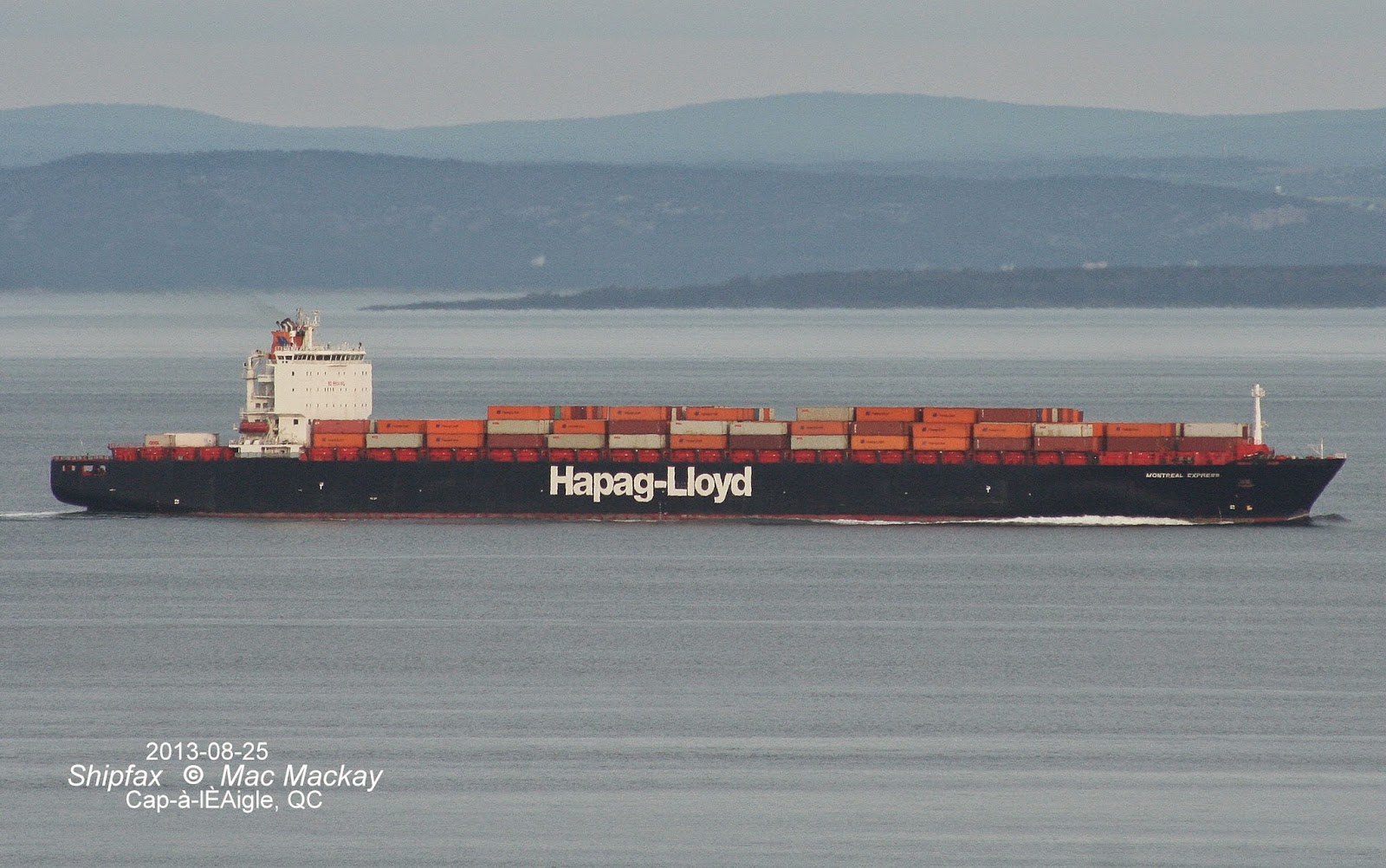 As was Montreal Express - they operate year round.

MSC has also announced that its North Europe/Boston/Philadelphia service will be maintained outside the 2M VSA. The 2M's Trans-Atlantic service will concentrate on New York and ports farther south. 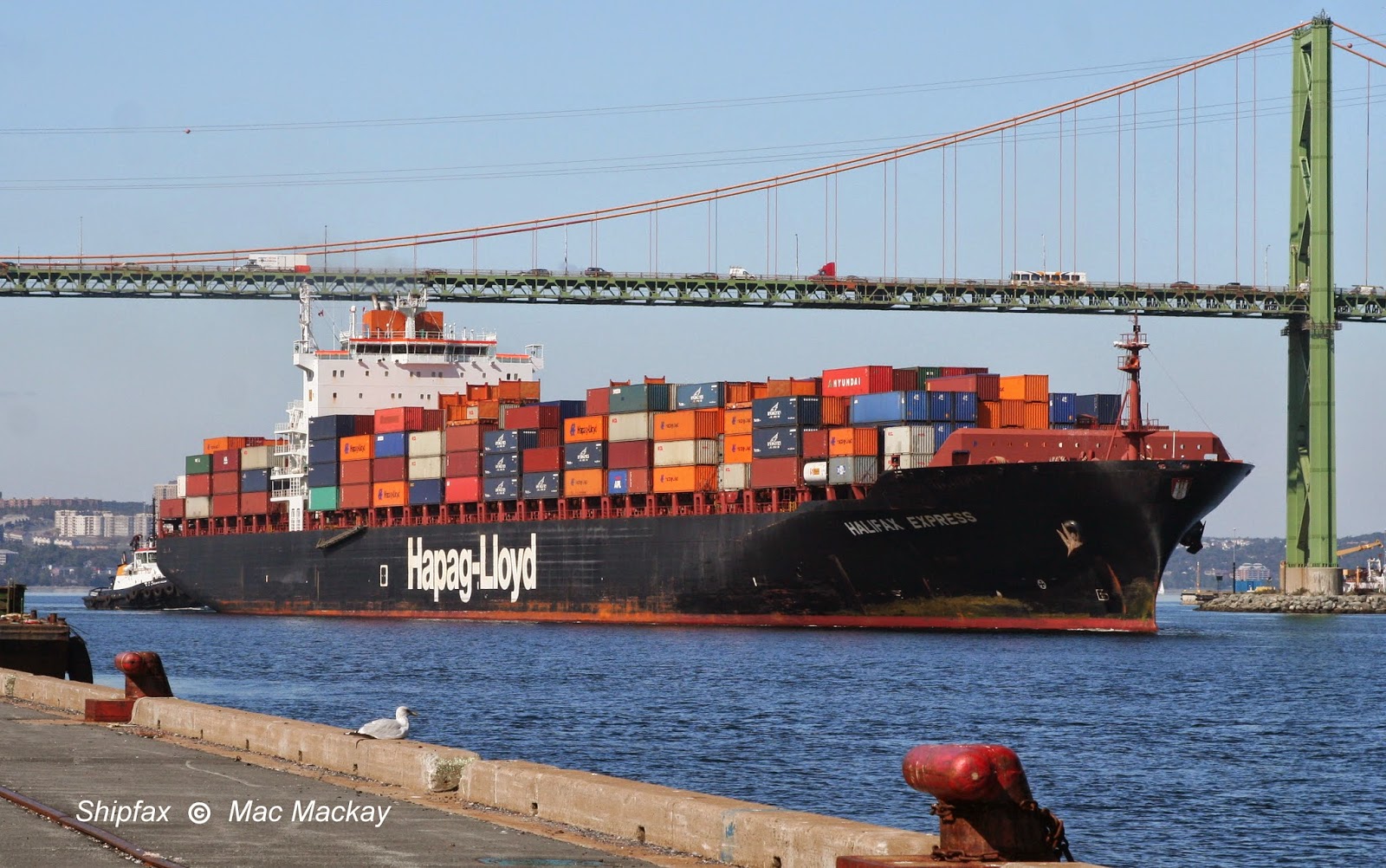 Halifax Express is one of the ships on the G6 Alliance service to Halifax that will compete head to head with the 2M.

There are numerous other VSAs and pooling arrangements between shipping lines, notably the G6 Alliance which calls in Halifax and includes HAPAG-Lloyd, OOCL, APL, MOL, NYK and Hyundai. That agreement ends in 2016. It has also announced a winter ship reduction for its Asia-US West Coast and Asia-US East Coast (including Halifax) services. That is as a result of week trading, and will see some 16 ships laid up or reassigned.

One possible ray of sunlight is the immense backlog of ships in Los Angeles/Long Beach port due to logistics delays on land, brought on by larger ships. Many of the ships delayed are ones we see in Halifax, so shippers may decide to re-route their cargoes.

Another point of future interest is the embryonic Canada Europe Trade Agreement (CETA) that still must be ratified by EU countries. If adopted as is, it will allow European shipping lines to trade between Canadain ports. Maersk's TA-4 would then be able to transport empties from Montreal to Halifax (which they are not allowed to do now) and even some cargo or make it a feeder service. MSC could do the same between Montreal and Saint John. 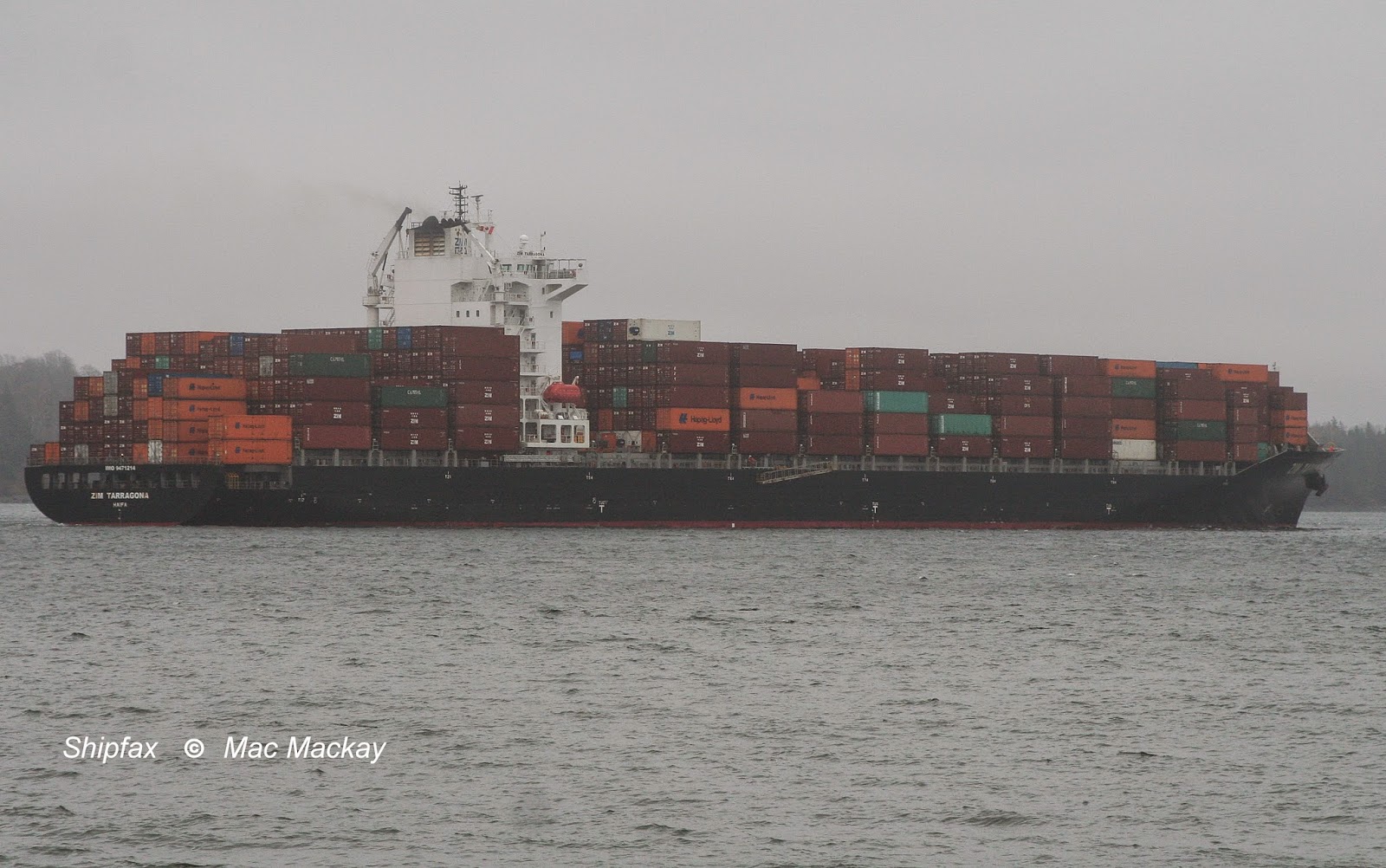 Left out of all the above is the notable exception of ZIM. It is the only major not included in any of these VSAs and alliances (altough it does have slot charter arrangements). Whether this will be to the line's advantage or disadvantage is hard to tell. Some say it will benefit them. As they enter a new era after financial restructuring, they are expected to order larger ships (they are already chartering in larger ships that call in Halifax). Working from their hub in Kingston, Jamaica, it is possible they will be able to compete even on trans-Atlantic work, which they abandoned years ago. Unfortunately ZIM has been targeted by protestors in the US due to its association with the state of Israel. In recent weeks ZIM ships have been delayed in Oakland, CA, and Tampa, FL, by demonstrations against Israel's recent actions in Palestine.

Amoing other factors that will bear on Halifax in the coming months:
- the new Panamax canal and its larger size limits (which will be exceeded by improvements to the Suez Canal)
- fuel surcharges on containers to compensate for the new low sulphur content regulations that come in to effect in January.
- pressure for improved port efficiency. With some Asian ports moving 120 containers per ship per hour, major US ports in the 80-85 range, Halifax's and Montreal's 51 seems slow. However the number of cranes per ship in some of those ports is twice what we offer.Halterm has already added new cranes this year and Fairvew is expecting some next year, but the giant ships that would justify more cranes are not on the horizon. Productivity in our case would be to ensure that ships get out of port in 8 hours, without overtime charges. 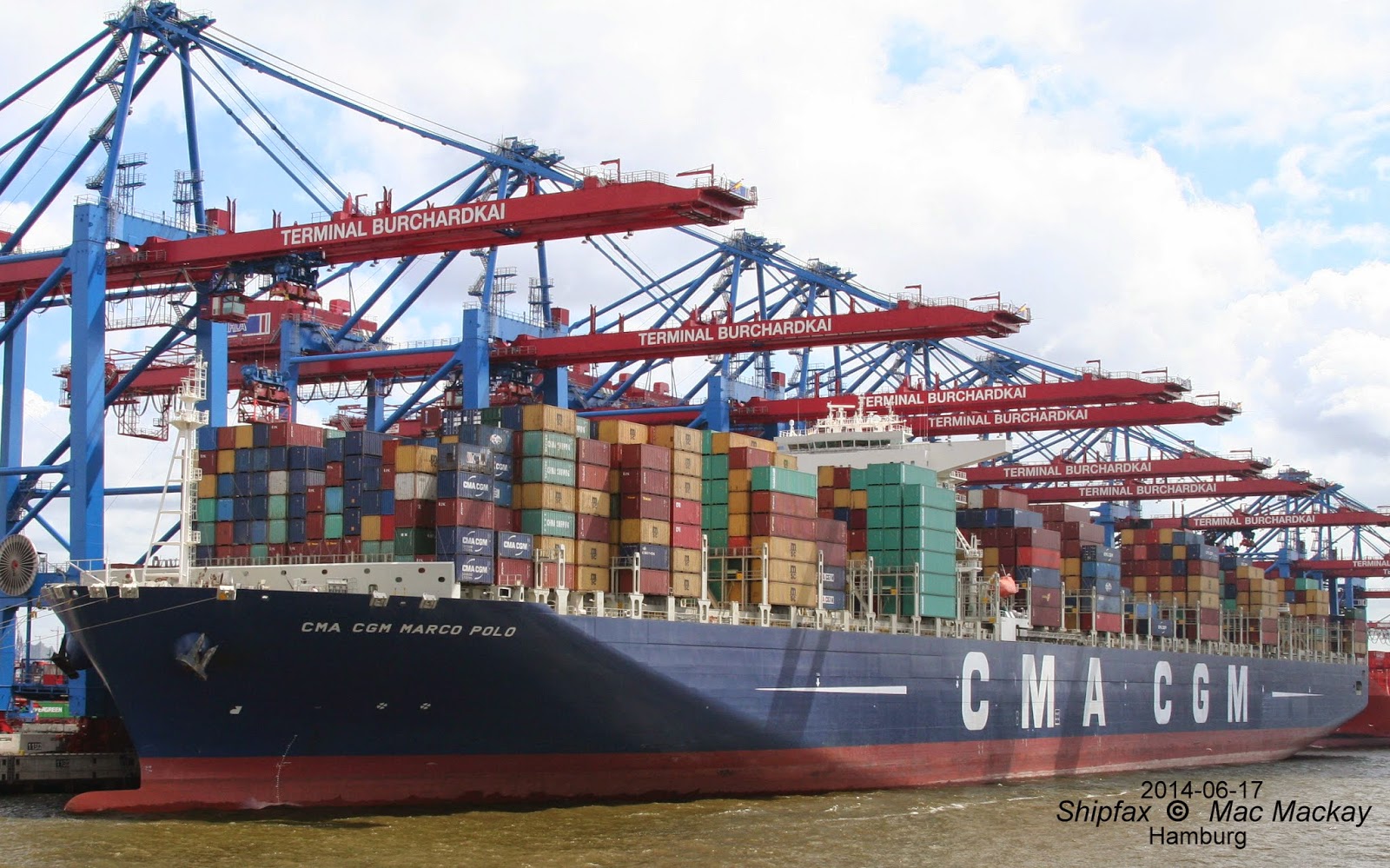 One big ship and seven cranes would certainly show vastly more moves per hour per ship than Halifax could produce. One mid-size ship with three cranes or maybe four would be about our limit, but usually it is only two. 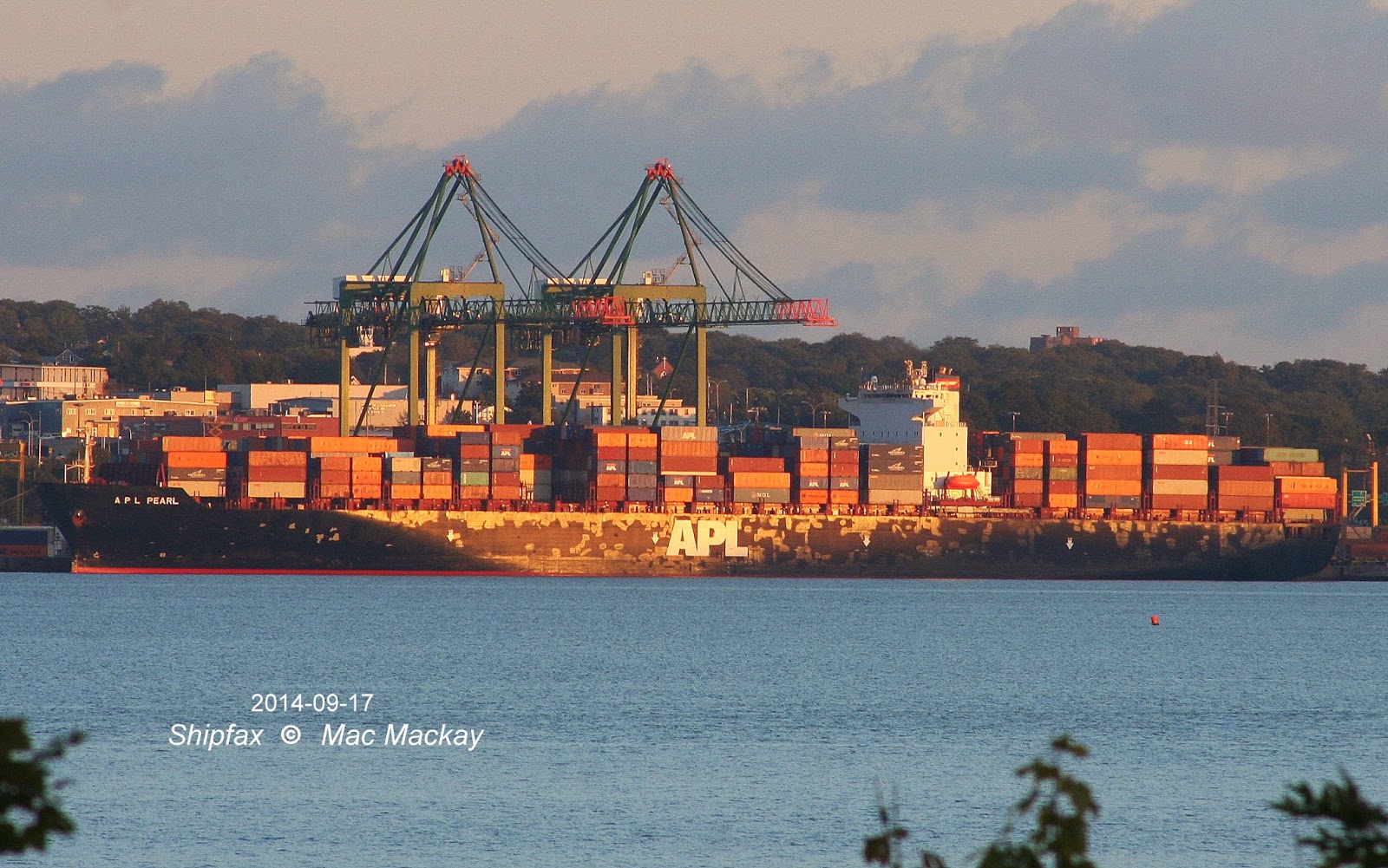 Cerescorp's two large cranes work the largest sizes of ships that come to Halifax. Its smaller cranes don't have the height or reach to work the big ships fully.