The two container terminals in the Port of Halifax are coping with the extra demands of diverted ships from Montreal due to the longshore strike while still handling the regular Halifax traffic.

PSA Halifax, operators of the southend container terminal are finding creative ways to store containers both on their property and off. One means of expanding their "on property" capacity has been to use the space occupied by the loop track that surrounds the property just inside the perimeter fence. That track has been used by VIA Rail to turn the passenger trains that dead end in Halifax.

As a convenient way to turn an entire train around, the loop track has also been a bit of a nuisance for the terminal operator. Having a train run through a busy port facility posed a safety risk, and required good clearance from stacked containers and equipment.

Current operators, PSA Halifax, announced that they would be removing the loop track in the late fall of 2020 when the pier 42 extension was complete, but the closure has come several months early. VIA Rail suspended its passenger service due to the COVID-19 pandemic and are not using the track. VIA Rail has stated that when service resumes they will be using a different type of equipment that will not need to be turned.

PSA Halifax sped up the track closure and last week completed reinforcement paving along the track. Although the rail has been left in place, PSA has gained a lot of additional container stacking space. That space was needed more urgently than planned, so rail removal will wait. 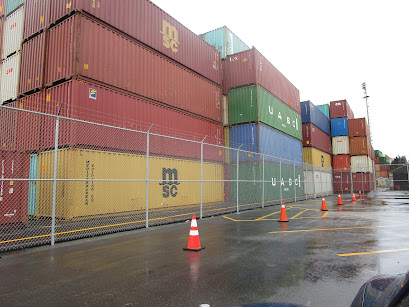 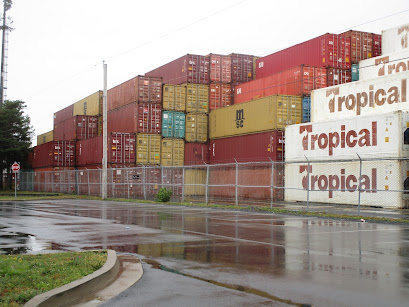 Containers stacked up to five high cover the rails of the loop track.

At the northend container terminal, Fairview Cove, operators Cerescorp, are also handling diverted ships and regular callers. Today one of those regular  lines, THE Alliance, welcomed a new ship to the route, Kyoto Express. Built by Hyundai, Ulsan in 2005, it is a 93,750 gt, 103,890 dwt vessel, making it just about the largest that can transit the Narrows and clear the bridges.

Kyoto Express under the big cranes at the Fairview Cove west berth.

The 8749 TEU (including 730 reefers) capacity ship towers over the diverted Genoa Express, which is awaiting export cargo at the east berth. It is typical of the size of ship that calls in Montreal. The contrast explains the pressures on the Port of Montreal. It has expansion plans for a site downstream of the main port that will be able to handle larger ships, but there is also new competition looming in the Port of Quebec and Saint John, NB as well as the traditional rivals such as Halifax and US East Coast ports. The efficiency of larger ships is making the smaller ships less and less competitive, particularly on a major trade route where capacity may be more important than frequency.