The Ortolan Gamma arrived this evening for ACL as a substitute for Atlantic Star which is currently showing at Gdansk, Poland. 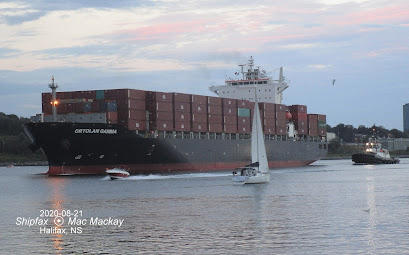 Ortolan Gamma makes its way up the Narrows en route to Bedford Basin.

ACL's five G4 ships must have maintenance periods and when they do there are no comparable ConRo (container, ro/ro) ships available, so conventional cellular container ships are pressed into service. Since ACL's owners, Grimaldi, own no container ships, they must charter in from the spot market.