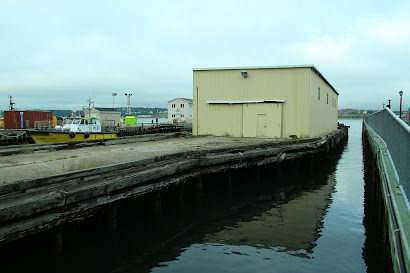 Some of the last commercial wharves on the Halifax waterfront are soon to disappear. I understand McNally Construction has been awarded the contract to remove the old Svitzer wharves. The two structures were acquired by Develop Nova Scotia (the former Waterfront Development Corp) a few years ago and have since been used by the Atlantic Pilotage Authority's boats.

The southernmost wharf ([ictureed above) carries the salvage shed, which housed a wide range of gear for marine salvage and maintenance equipment for the tugs. It has been vacant and unoccupied for a decade. 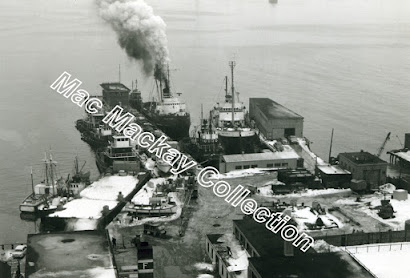 The wharves go way back, but are probably best known as home to the Foundation tugs from the 1930s  to the 1970s, and the successor companies Eastern Canada Towing Ltd (ECTUG) then Svitzer Canada Ltd. 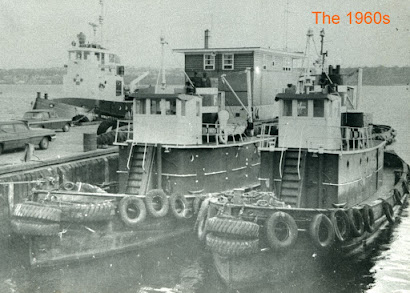 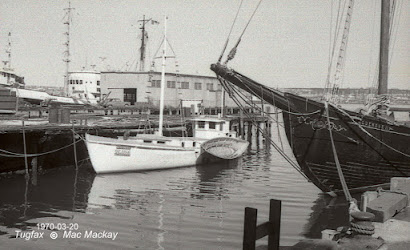 The deep sea salvage tug Foundation Vigilant tied up at the salvage shed. At the right Bluenose II, tied up at Oland's wharf - now long gone. 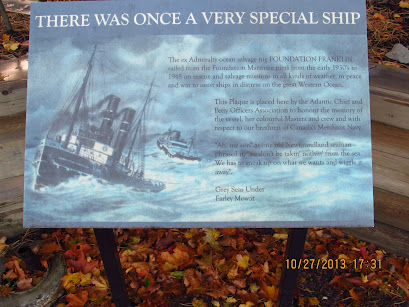 A plaque will soon be the only evidence that the wharves were home to a busy tug fleet. 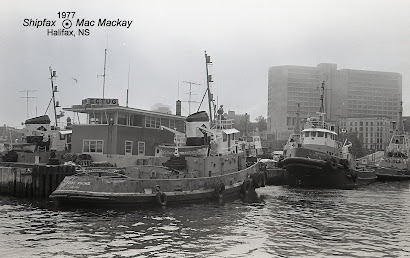 The cook house had the dispatch office on the second floor. 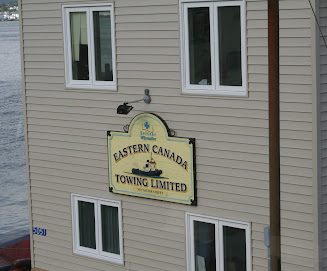 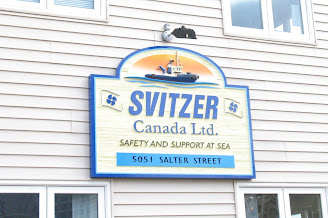 Eastern Canada Towing Ltd (ECTUG) operated tugs from the wharf, and were eventually taken over by Svitzer Canada Ltd. 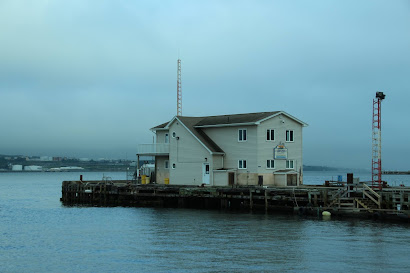 The northern wharf carries the Svitzer Canada building. Originally the Foundation Company cook house  and dispatch office, it housed a large commercial kitchen and mess hall on the ground floor where tug crews had their meals. At one time it was staffed by a cook and and assistant. The second floor was the tug dispatch office. The building also had a laundry and other storage.

When Revenue Canada deemed the tug crew's meals were a taxable benefit, the crews began to feed themselves, the cookhouse was closed and the the space converted for use by the harbour pilots. A refueling station was built on the end of the pier for the pilot boats.

After damage from a ship strike and hurricane Juan, the building was rebuilt. More damage from Hurricane Dorian in 2019 caused more damage to the pile structures.

The Atlantic Pilotage Authority will move to the former Fader Agency wharf in Dartmouth (just south of the Macdonald Bridge) in the next few days. 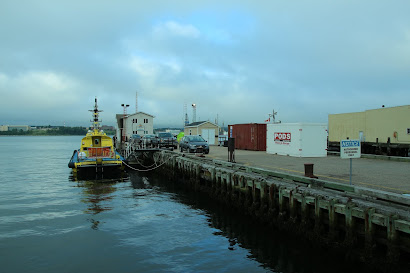 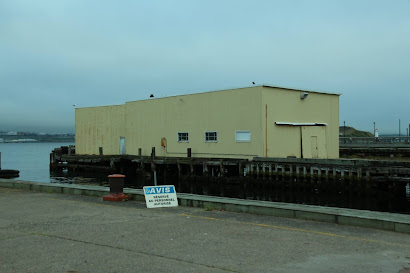 McNally Construction, the same company that built the walkway and piers just to the south (and most other important marine construciotn work in Halifax) has the $7.4 mn job to demolish the buildings and refurtbish the piers over the next seven months.

An expanded marina will occupy the area.

Since 2010 Svitzer Canada has had no tugs operating in Halifax, but maintained their office on the second floor of the former cook house. Svitzer Canada and Atlantic Towing Ltd have a joint venture agreement wherein Atlantic operates tugs in Halifax and Svitzer operates tugs in Point Tupper.  Svitzer recently renewed its contract with NuStar, one of the main customers in Point Tupper so the Joint Venture arrangement is unlikely to change. The Atlantic Towing tugs operate from the Dartmouth side of the harbour.