HAPAG-Lloyd added its name to the list of lines diverting ships from Montreal to Halifax due to the longshoremen's strike in the Quebec port. The Montreal Express tied up at Cerescorp's Fairview Cove terminal this morning, and is expected to remain in port for close to 24 hours to unload. 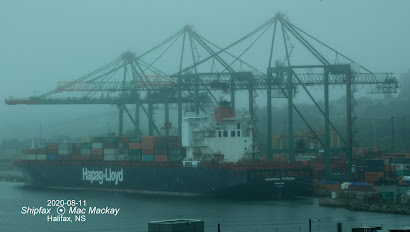 Looming through the fog Montreal Express has three cranes at work at Fairview Cove.

The ship was built in 2003 specifically for St.Lawrence River work as Canmar Spirit for Canada Maritime. It was relatively wide, shallow draft and ice rated. After absorbing its Belgian partner  Canada Maritime became 100% CPShips owned and the ship was renamed CP Spirit in 2005. HAPAG-Lloyd ended up as owners in 2006 when they bought up CP Ships in a hostile take over.

HAPAG-Lloyd is diverting ships to both Halifax and Saint John, perhaps in hopes of preventing overloading in any one port. It is interesting to note that after many years, CP Rail has renewed its rail connection to Saint John. The connection through Maine dates back to before 1900, but the last sections were abandoned or sold by CP by 1994. In 2019 they reacquired the Montreal to Brownville Jct track and a connection to Searsport. The Saint John connection is completed over Irving owned track.

Saint John is also served by CN Rail by means of a connection to Moncton, NB.

MSC and Maersk/ CMA CGM have also diverted ships to Halifax in recent days, but will also be using Saint John. MSC Rochelle, en route from Liverpool, has been anchored off Halifax for several days, possibly waiting for its export cargo to arrive in Halifax by road and rail.