The inner anchorages were busy this morning as was the Canadian Food Inspection Agency, with two ships in port for Asian Gypsy Moth inspection.

First in was the tanker Leopard from the Baltic destined for Come-by-Chance, NL. Another member of the 110 ship strong Norient pool, it was built in 2010 by Iwagi Zosen, Kamijima, Japan, measuring 28,798 gt, 47,991 dwt. 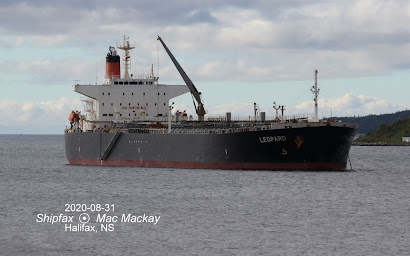 Irving Oil is now the owner of the 135,000 bbl / day Come-by-Chance refinery after buying North Atlantic Refining Corp. The purchase includes 100 gas stations and two harbour tugs. Irving Oil also owns a 71,000 bpd refinery in Ireland in addition to its giant 320,000 bpd facility in Saint John, NB. Come-by-Chance exports a significant portion of its output to the US and will likely continue to do so. The refinery was shut down in the early days of the COVID-19 pandemic, and Irving has plans to keep it in "care and maintenance" status so it is likely that this ship is bringing product in for local Newfoundland consumption. 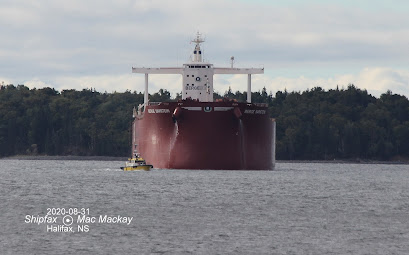 It is interesting that despite the prominence of South Korea and China in shipbuilding, both these ships were built in Japan. Once the world's largest shipbuilder, it is still noted for its quality of construction.

Ships of this size usually load iron  ore in Canada, but its name does not show up on the Sept-Iles, QC schedule, so it may be headed for Port-Cartier, QC. Both ports are well within the area of concern for Asian Gypsy Moth.
.