The effects of the Montreal longshore strike are likely to be felt in Halifax for weeks to come, even though the two week work stoppage has been over for a week. Today's arrival of Maersk Palermo is just one example of how schedules have been thrown for a loop. 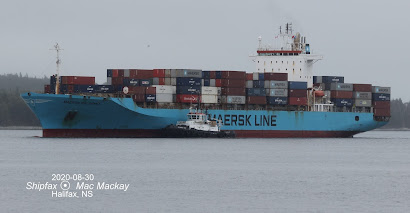 The ship would normally be arriving in Montreal yesterday or today from Antwerp, and would then call in Halifax on its eastbound leg next weekend.

It seems that to avoid the Montreal backlog the ship has been sent here directly instead. PSA Halifax will now have to accommodate all of the ship's cargo and dispatch it westbound.