It was announced on Friday that the longshore unions and management have reached a truce in Montreal allowing the port to re-open for business. Reports indicate that it may take as long as a month for that port to return to normal. It will certainly also take time for Halifax to clear all the accumulated import and export containers, including some that are likely in transit by truck or train.

The immediate effect was that one of the ships anchored off Halifax weighed anchor and headed for Montreal. 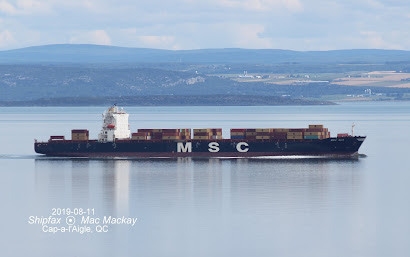 MSC Ela arrived off Halifax about August 16 from Sines, Portugal, and sailed last evening. Another MSC ship, MSC Weser sailed from anchorage off Saint John. Both gave Montreal as their new destinations.

MSC Ela dates from 2004 when it was built by Hanjin Heavy Industry+Construction, Busan. The 54,304 gt, 68,307 dwt ship has a capacity of 5059 TEU, but in normal St.Lawrence River configuration carries many fewer to maintain draft.

The Quebec Express remains at anchor off Halifax at least for the time being, and EM Kea is due this morning.