Triple Header at PSA and Monsoon at 9C

For the first time in my recollection there were three ships working at Pier C today. The southend container terminal has increased its footprint considerably since it was inaugurated in 1970, but the core of the operation has been Piers 41 to 42.  The southernmost of those berths, pier 42, is now being extended and crane rails will soon reach well beyond the current end of berth 42. The enlarged pier will be able to handle two Ultra size (10,000 TEU or larger) container ships. But now, even before completion of the extension, with the newest crane in service, the terminal operators, PSA can use all five cranes on berths 41-42.

There was probably some urgency in working these ships today as more diversions from Montreal are expected in the next few days.

Wilson Monsoon arrived from Aberdeen, Scotland last night and was busy today loading anchor chain and buoys at Pier 9C. The materiel had only arrived in Halifax July 4 on sister ship Wilson Mistral to be used to moor the BOA Barge 34 in Mulgrave. See: http://shipfax.blogspot.com/2020/07/wilson-mistral-at-pier-9c.html 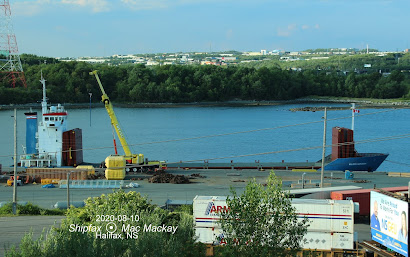 The plan to anchor the barge in Mulgrave was cancelled when no good holding ground could be found, and instead the barge and its deck load, the Deep Panuke production centre, have been moored at the IEL dock in Dartmouth. Plans to sell the structure have apparently been unsuccessful and it will now be scrapped. The contractor for that operation is to be selected by the end of the year.

The chain and the buoys (the yellow objects adjacent to the crane) will likely be headed back to Scotland.