It was a busy day in Halifax with several comings and goings.

The tanker Baltic Mariner I  arrived at Irving Oil's Woodside terminal. The ship has refined product from Antwerp,[Amsterdam!] but called in Saint John first to discharge some of the cargo. This is the reverse of the usual order where the ships call here first before heading to Saint John. 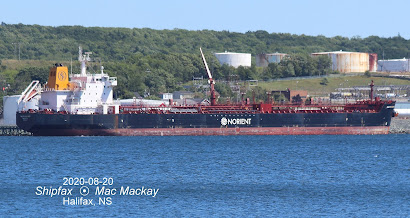 Whatever product it was carrying it was needed at Woodside more urgently than what company tanker  East Coast is carrying. That ship arrived Monday and is anchored waiting its turn to unload. 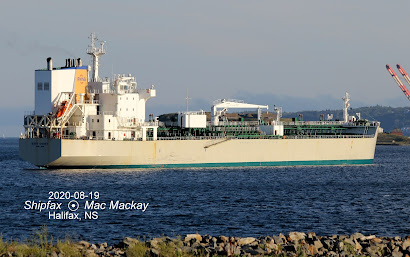 An unusual stopover took place this afternoon as NACC Newyorker put in for a short time to change some crew members. Dominion Diving's launch Halmar carried out the transfer. 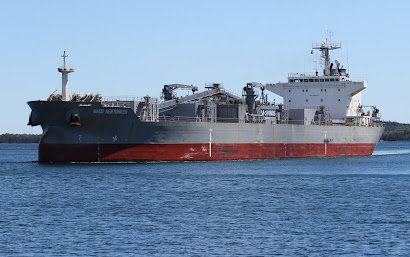 The ship operates for Nova Algoma Cement Carriers under a charter to McInnis Cement running between the cement plant in Port Daniel, QC and US ports. Built in 2009 as the bulker Endeavour by Nanindah Mutiara, Batam, Indonesia, it was renamed NACC Napoli in 2017 when it was converted to a self-loader/ self-unloader.

Another brief stopover was the bulker Nordloire which arrived yesterday at pier 28. It had loaded soya cargo in Quebec City and came to Halifax to top off. This is an unusual cargo since Halifax is not a large shipper of local agricultural product.

The ship was built in 2013 by Zhejiang Ouhua Shipbuilding Co and measures 24,195gt, 37,212 dwt and carries four 30 tonne cranes. (I see the crew is in the midst of repainting the cranes.) Its original name was Nloire until 2017, and operates for Nord GmbH Reederei of Germany.

There was also lots of container activity today, thanks to the Montreal longshore strike and normal callers.

Late this afternoon MSC Rochelle moved from anchorage back alongside PSA Halifax, They ship had unloaded earlier in the week and moved out to anchor awaiting its outbound cargo to arrive by rail and truck. Judging by the huge number of trucks from Ontario and Quebec at Halterm today, there will be lots of boxes going aboard.

There are five container ships anchored off the port awaiting their turns or outbound cargo. Ortolan Gamma, MSC Ela, Quebec Express and EM Kea are diversions. Atlantic Sail is a regular, waiting a berth.