One of the great things about Halifax harbour is the great variety of shipping. Today alone there have been tankers, auto carriers, container ships and offshore tug/suppliers, plus tour boats. Mixed in with this are many pleasure craft.

While commercial shipping is operated by professionals in a safe and responsible manner. It is too bad that the same cannot be said for pleasure craft. 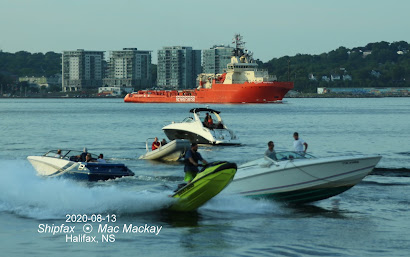 As Atlantic Kingfisher was sailing this evening I witnessed one of the most flagrant acts of idiocy I have seen recently. I was only able to capture part of it on film, but the above photo shows one of several personal watercraft speeding between more peaceful watercraft and endangering scores of people. I see one of these incidents almost every day - some in close proximity to ships.

There have been serious accidents in the harbour, some resulting in death, but these do not seem to deter the committed speed demons.

There is also no obvious police presence, which would likely act as a deterrent, but why should adults need supervised play at tax payers' expense.