IT Integrity - back in port

IT International Telecom's IT Integrity arrived back in port today from its first mission. The ship first arrived in Halifax May 17 shortly after its acquisition from a UK subsidiary of Tidewater. A quick refit, included installation of a 25 tonne capacity A-frame on the ship's stern, to support ROV operations. The ship then sailed for the Caribbean. Its last port is reported as Roatan, Honduras. 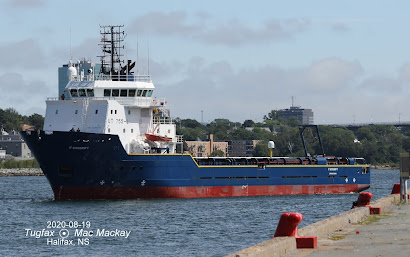 The vessel was completed in 2001 by Soviknes Verft in Norway on a hull built by Aker Tulcea, in Romania. Named Highland Fortress it is a UT755-L design offshore platform supplier.

IT International Telecom will use the ship in variety of chores including cable repair and laying, route survey and ROV support functions. It has accommodation for 38 persons, and considerable below deck tank cargo capacity. The latter may be converted for cable stowage.

The ship will continue to fly the Barbados flag as with the other two members of the fleet, IT Intrepid and IT Interceptor. Although IT International Telecom is based in Halifax, the company's ships are usually on standby in Baltimore, MD to be better positioned for emergency repairs on the east coast of North America.