The sun was setting but it was still bright this evening for a little while. At Fairview Cove the diverted Genoa Express was shifting from the west berth to the east berth with assistance from the tug Atlantic Fir. 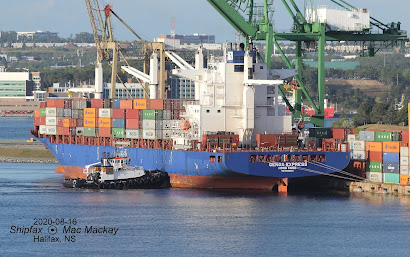 Unusual for a HAPAG-Lloyd ship, this ship is not owned but chartered in from an anonymous Hong Kong company. Launched as Conceiver in 2014 by Hanjin Heavy's yard in Subic Bay, Philippines, it was renamed MOL Naja on delivery. Measuring 41,286 gt, 51,500 dwt, it has a 3800 TEU capacity and unusually for a ship its size carries four 40 tonne capacity cranes. It became Genoa Express in 2016.

The ship is diverted to Halifax due to the Montreal longshore worker's strike. It is shifting along the pier to make room for Kyoto Express, then Budapest Bridge tomorrow.

At the south end of the harbour PSA Halifax is working the diverted MSC Rochelle.

At Pier 9C USCGC Biscayne Bay put in for an overnighter.  in normal times the boat would tie up at a public pier or in HMC Dockyard, but I am guessing that due to COVD-19 it is being isolated away from other harbour activity. 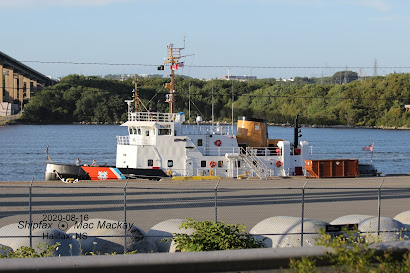 Biscayne Bay WTGB-104 is an icebreaking tug and is returning to its home port of St.Ignace, MI after a year long life extension refit at the USCG shipyard in Curtis Bay, MD. Commissioned in 1979 it is the last of the Bay class to get the upgrade.