There were three arrivals of interest today. The early bird at 0600 hrs was the container feeder Ilios on ZIM's Canada Feeder Express service.The ship appears on ZIM's schedule for the next several weeks. It is taking up the slot vacated by Tampa Trader and recently filled by spot charters. 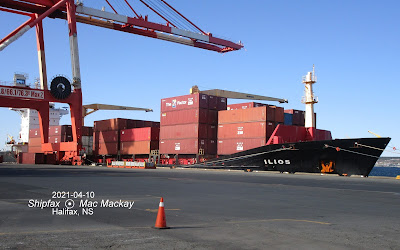 The ship is not exactly a stranger to Halifax, having called here starting January 8, 2017 under the name Vega Omega when it inaugurated Tropical Shipping's Halifax service after relocating from Saint John, NB.  See previous post (and better picture) here.
The ship was built in 2006 by Qingshan Shipyard in Wuhan, China. It measures 9940 gt, 13,639 dwt with a capacity of 1118 TEU (including 220 reefers) and carries two 45 tonne capacity cranes. It started life as Surinam River but was quickly renamed Eagle 2 then in 2008: Vento Di Maestrale, 2011: Surinam River, 2012: Vento Di Levante, 2014: Vega Omega, 2019: Ilios.
Another ship with many renames also arrived. MSC Annick has had seven previous names and has operated for several major container lines. Another of MSC's older ships, it was built in 1998 by Hyundai, Ulsan. A 40,306 gt, 52,329 dwt vessel it has a relatively modest (published) capacity of 3987 TEU. When the ship sails overnight it will  be loaded to a more efficient saltwater draft for its transatlantic crossing. (It also appears to be scrubber equipped - see previous post) 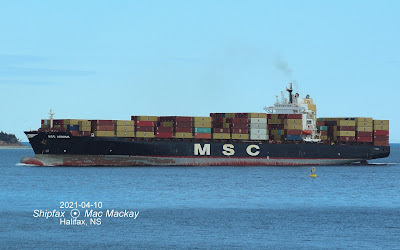 Arriving from Montreal to top up, MSC Annick is operating at freshwater draft.
The ship has carried the names 1998: Mare Superum, 98: Elbe Bridge, 2004: P+O Nedlloyd Cartagena, 2005: Maersk Tirana, 2006: Dalian Express, 2006: Maersk Tirana, 2009: Mare Superum, 2013: MSC Annick.
According to some reports MSC may have recently overtaken Maersk Line as the largest container shipping line in terms of carrying capacity. Both lines have container capacity of just over 4 million TEUs. Maersk, with more than 700 ships has about 100 more than MSC.
The colorful Grande Baltimora arrived for Autoport late this afternoon. 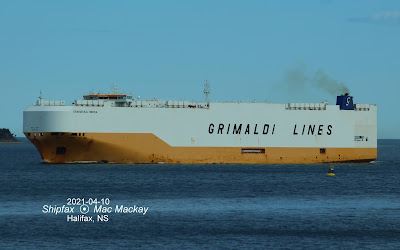 The ship has a 6700 CEU capacity. Built in 2017 by Jinling Shpiyard in China, it is a 62,134 gt, 13,447 dwt vessel, equipped with a 150 tonne capacity stern ramp. Owners, the Grimaldi Group, of Italy, are in the midst of a major expansion with new PCTCs and CONROs under construction in China. They are also the parent company of Atlantic Container Line (ACL) a mainstay of the port of Halifax.
.
Posted by Mac at 8:14 PM