Trabzon - another one for bunkers

For the second day in a row a ship has tied up at Pier 9C for bunkers. This time it is the bulk carrier Trabzon. 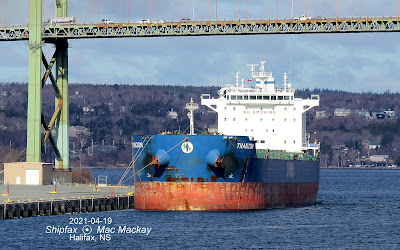 The ship arrived this morning from La Baie (Port Alfred), QC where it discharged a cargo of bauxite loaded in Kamsar, Guinea. One of word's busiest ports for bauxite, Kamsar has a limit to ships of 229m maximum length (slightly larger than Panamax).

Thus a whole breed of bulkers have been built to that dimension and are are termed "Kamsarmax" , and Trabzon is one.

A truck from RST Transport, carrying Irving Oil, begins to refuel the ship.
The Trabzon was built in 2011 by Hyundai, Ulsan, and is a 44,635 gt, 81,660 dwt gearless bulker (in other words it has no cranes for cargo handling.) Owners Ciner, are the largest shipping company in Turkey, by tonnage, with 28 ships.
Ciner Shipping is only one part of the Ciner Group of companies, involved in many business sectors including resources, manufacturing, media and tourism. Ships carry the Ciner Group corporate logo: 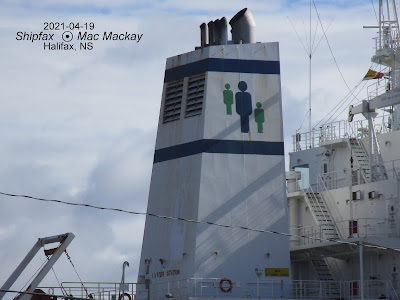