Although the commercial fishery is a major component of the Nova Scotia economy, we see few fishing vessels in Halifax these days. At one time the waterfront was lined with fish plants and trawlers were coming and going all the time. Foreign fishing vessels were also regular callers, particularly from the Communist countries.

All that is changed now after overfishing depleted the resource. The fish plants are gone and so it is rare to see a trawler in Halifax. On April 3 the trawler Mersey Phoenix put in to Halifax -not with fish to process, but for engine maintenance. 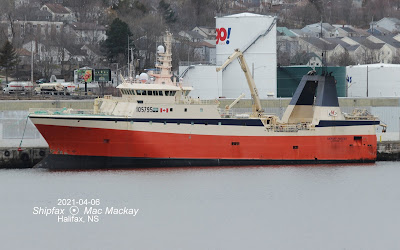 Mersey Phoenix is a stern trawler with on board processing. Its hull was built the Yantar Shipyard in Kaliningrad, Russia, but the ship was completed in 2002 by Umoe Sterkoder AS in Kristiansund, Norway. Designed by Konsberg to its NVC-371 type, it is a 3423 gt vessel, specialized for North Atlantic cold-water shrimp (pandalus borealis). It carries a crew of thirty and generally fishes north of Labrador in the Baffin Strait between Baffin Island and Greenland. Although owned by Mersey Seafoods of Liverpool, Nova Scotia, the boat is based in Country Harbour, NS and sometimes puts in to St.John's NL for stores and fuel.

When the cod fishery was closed some fishing companies re-focused on the northern shrimp, which has  proven to be a sought after delicacy, since it is far superior to the southern varieties and farmed shrimp. 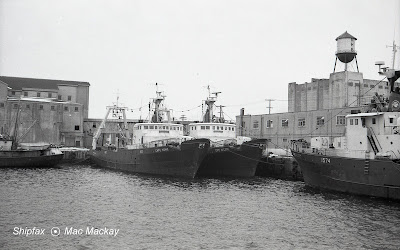 "Those were the days"

The stern trawlers Cape Alert  (right), Cape Howe and Cape Nelson and an older side trawler at National Sea Products "Forty Fathom" fish plant at Pier 29. The building with a water tower in the background and the ones on the left were part of the National Harbour Board's freezer plant where frozen fish could be stored for later shipment domestically or overseas.