Once again a bulk carrier has arrived for Asian Gypsy Moth inspection. However instead of departing for Quebec to load iron ore or grain this ship is giving its next port as Saint John, NB. 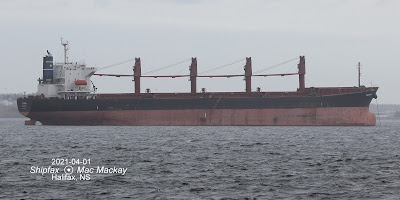 Sikania is considered to be a "handymax" ship of 29,963 gt and 53,553 dwt. It is fitted with four cranes and grab buckets for handling bulk cargoes.
The ship was built in 2001 by Imabari Zosen in Marugame, Japan. Originally named Nordstjernen it was renamed Port Nelson in 2006, and Santa Fe in 2014. It took its present name in 2015. Flying the Liberian flag, it is owned by TST International, a company registered in the Marshal Islands  and legally established in Greece.