The auto carrier Tannhausen made its first North American port call in Halifax April 8-9. The 73,358 gt giant was completed by CISC Tianjin  Xingang in China in September 2020 and arrived in Europe on its maiden voyage in December 8. It is the third HERO class of energy efficient post Panamax large car and truck carriers (LCTC) in the Wallenius Wilhelmsen fleet, joining Traviata and Titus. 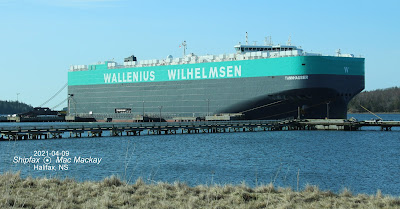 Measuring  24,155 tonnes summer deadweight, ship has a capacity of 7656 RT43 size autos, and is equipped with  320 tonne capacity stern ramp. In common with many new auto carriers it has no side door and ramp.

Tannhauser off loaded machinery at Pier 31 on April 8, and discharged automobiles at Autoport April 9 before sailing at noon.

The merged Wallenius and Wilhelmsen fleets have adopted the new common livery, but have also merged their naming traditions. New ships are named for operatic characters (Wallenius) whose names start with the letter "T" (Wilhelmsen). (Tannhauser was a fictional medieval poet in the Wagner opera of the same name.)