Sprucing up for summer

Although there will be no cruise ship season in Halifax this year, there will be some tourism and apparently some harbour tours. Murphy's (owned by Ambassatours) has therefore placed one of its boats in refit to be ready when the time comes. 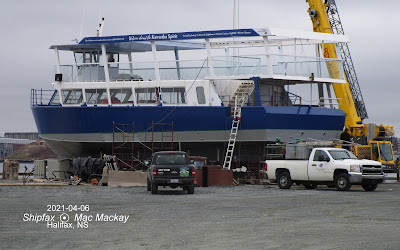 Kawartha Spirit has been lifted out at the IEL dock in Woodside, and has received a new blue hull paint, replacing the original white.

Kawartha Spirit is one of Murphy's two active large boats, along with Harbour Queen I . It replaced Haligonian III which was scrapped in 2018, but is unaccountably still registered.

Built by Hike Metal Products in Wheatley, ON in 1964, as Miss Muskoka, the Kawartha Spirit spent all its life in fresh water until 2016 when it made the long trek to Halifax. It was in much better condition than its newer sister Haligonian III which was built in 1972 and spent its entire career in salt water. See: Haligonian III

There has been talk that Kawartha Spirit will be renamed to something more relevant to this area, and this seems like a perfect time to do it.