With another longshore labour action planned for Monday in Montreal, we will again be watching for ships diverting to Halifax. After on again off again negotiations resulted in no new contract, the union announced last week that they would be declining overtime and weekend work. Then at the end of the week they announced a general strike to start Monday April 26. Several ships sailed from Montreal Friday in ballast, heading for New York - the closest port for truck connections to Montreal (and fewer COVID restrictions).

So far no diverted ships have arrived in Halifax, but oddly one ship sailed for Montreal this afternoon April 25. MSC Veronique has been calling here to offload some cargo to reduce draft for the St.Lawrence River, and apparently did so this time. Perhaps MSC is hoping for a labour resolution before the ship reaches Montreal. Either that or timely delivery of cargo is not a major concern. 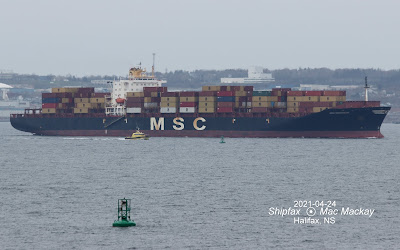 A prolonged strike in Montreal could have serious economic impacts. Most import container cargo would be diverted to Halifax, Saint John or New York, causing delivery delays. Export cargo could clog the rail systems even though the ports have surplus capacity.

One particular concern is the import of fertilizer for spring planting. Other ports are not equipped to handle this product and so the impact could be quite serious. Grain exports are not effected by the strike as grain cargo has long been designated as an essential commodity and is exempt from strike action.

Some cargo has already been redirected to Halifax by shippers chosing different shipping lines that already call in Halifax. In those cases we don't see different ships. Increased rail traffic in recent weeks including extra trains, certainly confirms the fact that the port is busier. A lengthy strike will certainly cause ships to divert to Halifax, and that will be more noticeable.