Product tankers of the Medium Range size (35,000 to 55,000 deadweight tonnes) are frequent callers in Halifax as they are used to transport "clean" / refined products throughout the Atlantic Basin stretching from the US Gulf and East Coast, Canadian East Coast, and Caribbean to Europe. Therefore to see two in port at one time is not all that unusual. Today there was one such tanker at Imperial Oil and one waiting for Irving Oil. 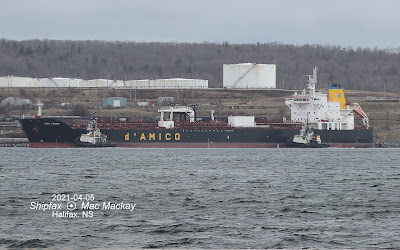 The ship at Imperial Oil is the familiar High Trust, a ship that was last here as recently as January 29. Built in 2016 by Hyundai Vinaship in Vietnam, it is a 29,935 gt, 49,990 dwt MR tanker operated by the Italian d'Amico group. It arrived from Antwerp with its cargo.

Awaiting its turn at the Irving Oil Woodside terminal Elka Bene arrived at an inside anchorage last evening after a period anchored outside the port. 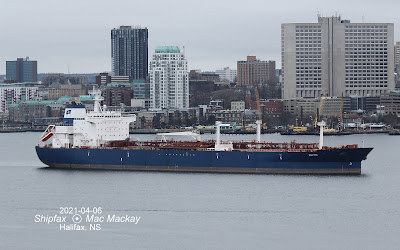 It is a 30,770 gt, 45,467 dwt ship built by Brodosplit in Split Croatia in 2002. It was launched as Asirat, renamed Bene on delivery and renamed Elka Bene in 2004 when it took up its present charter to European Product Carriers Ltd. Its last port was Amsterdam where Irving Oil has a terminal.
A third tanker, the slightly smaller (Intermediate size) Acadian arrived at Irving Oil this afternoon from Saint John. The 23,552 gt, 37,515 dwt ship was built in 2005 by Hyundai Mipo for the long term charter to Irving Oil. Owners have been variously listed over the years, but are part of the Vroon company, based in the Netherlands. They also manage the ship through Iver Ships BV. However as an Irving Oil "company ship" it apparently had berthing priority.

Irving Oil's five tankers, all sister ships, three under Canadian flag and two trading internationally under Marshal Islands flag, are immediately recognizable by their unique hull colour (some call it "biscuit") and the prominent exhaust gas scrubber fitted abaft the original ship's funnel. The scrubbers allow the ship to burn heavy fuel which is banned from use in ships without scrubbers.
A fourth "tanker" sailing from Halifax today is also worth noting. It is the Asterix the Royal Canadian Navy's chartered supply ship. 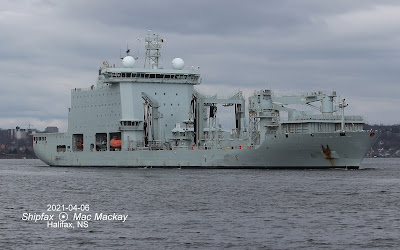 Always an impressive sight, the ship carries fuel for Canadian naval vessels, which it took on board from Irving Oil last week. It also carries a variety of other supplies which can be transferred at sea.
Also in port today was the container ship MSC Brianna en route to Montreal. The oft renamed ship was built as far back as 1996 by Daewoo Shipbuilding and Marine Engineering, Okpo, South Korea. 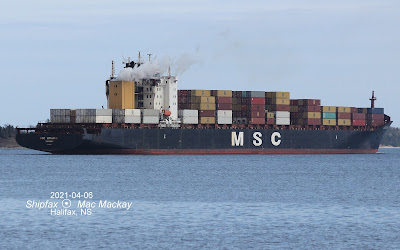 It is also fitted with an exhaust gas scrubber, which was obviously in use as the ship sailed. The byproduct of the scrubbing process is water vapour, and scrubber equipped ships often leave a vapour trail reminiscent of jet aircraft. It is interesting that the owners were willing to invest in a scrubber system to get a few more years out of an older ship. (The ship is owned by NSM Brianna Shipping Co Ltd and on charter to MSC).
The Mediterranean Shipping Company (MSC) was built on working with older and nearly obsolete ships from other companies. MSC Brianna is typical in that sense. Built originally as OOCL Germany it was renamed APL Germany in 1998, Germany in 2002, P+O Nelloyd Caribbean in 2002, Maersk Doha in 2003, MSC Columbia in 2013 and finally MSC Brianna in 2013. At 51,931 gt, 60,200 dwt it has a container capacity of 4168 TEU, and is just about maximum size for St.Lawrence service.
.