A new to Halifax ship arrived at Autoport this morning April 27. RCC Prestige offloaded some new cars and sailed before noon. The ship is an unusual one, mainly due to its size. Although it looks like most of the auto carriers we see, it is a sort of miniature version.

Built in 2011 by Hyundai Mipo, Ulsan as Glovis Prestige its size of 36,834 gt and 11,196 dwt gives it a capacity of only 3600 cars (4,000 cars nominally). That is about half or less than the capacity of the most recent callers at Autoport. The ship is operated by Ray Car Carriers and was given its present name in 2018.

The ship was obviously built to serve a certain market where large numbers of cars were not needed or the port facilities were small. Therefore it is unusual to see it on North Atlantic service where bigger is usually better. Also unusual was the ship's destination of Houston. Skipping New York or Davisville, RI - the usual next ports for auto ships - suggest a special cargo.  The ship's last ports were Emden, Germany and Eleusis, Greece.

There has been no resolution of the longshore labour strike in Montreal, nor has  but legislation been introduced to bring it to an end. Container ships have departed Montreal en masse. Since the strike began Monday, some have been sent to anchorages on the Lower St.Lawrence and others returned to sea. Among those is MSC Eleni which was last in Halifax April 14. It returned again today April 27. 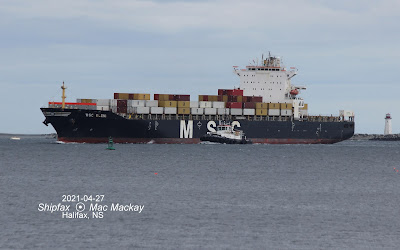 Atlantic Oak comes alongside a lightly loaded MSC Eleni on arrival in Halifax.

From the look of the ship it did not pick up much revenue cargo on its recent call in Montreal. The relatively low deck load is certainly one indicator. I do like the one lone box out on the stern, an area usually reserved for empties.

The ship will top up cargo during its call in Halifax, with the intention of loading to a more efficient salt water draft.