Where are they now

The "Where Are They Now" department of Shipfax has not been heard from in some time, but a recent Facebook post has inspired a revisit.

The history of the Halifax - Dartmouth ferry service is a long one. In fact from the date of the first charter in 1752, it is claimed to be the oldest salt water ferry service in North America, and the second oldest in the world after the Mersey ferry between Liverpool and Birkenhead, England. Before the first steam paddle ferry was introduced in 1832, there was even a "team" ferry where horses were used on a sort of treadmill to power paddle wheels. 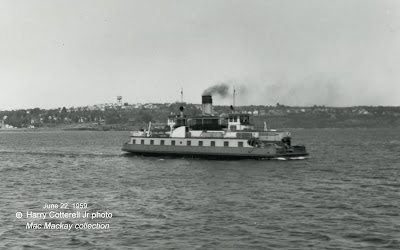 Although this photo from my collection is dated 1959 it is almost certainly pre-1956.

The service carried vehicles until 1956 when the Angus L. Macdonald bridge was completed, allowing cars, trucks and buses to cross the harbour at will. At that time a pair of little wooden hulled pedestrian only ferries, designed by William Roue and built by Smith+Rhuland in Lunenburg entered service (They bore no resemblance to the schooner Bluenose designed and built by the same team!). They were named Dartmouth II and Halifax II after much larger car carrying predecessors. They were "double enders" and with dual controls of rudders and props fore and aft, they did not have to turn or reverse to dock at each end of the run.

The wooden ferries were given orange "speed" chevrons and wheelhouse bands in their later years.

As with all wooden hulled vessels, they had limited service lives and were replaced by the steel hulled vessels Dartmouth III and Halifax III in 1979. Built by Ferguson Industries Ltd in Pictou, NS, these unique craft were "side loaders" embarking and disembarking passengers to floating landing stages via short ramps on one side only. 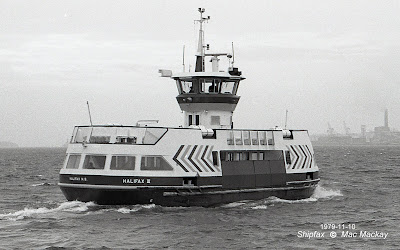 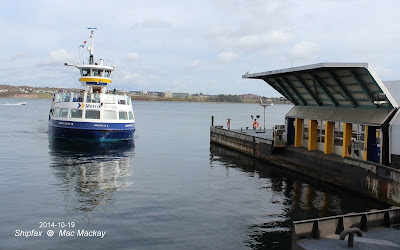 The landing stages had canopies to shelter passengers as they embarked or disembarked. 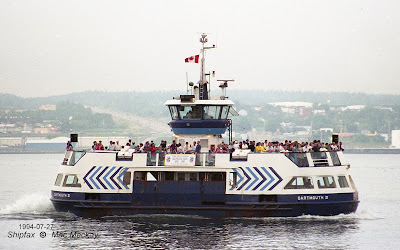 The "passenger" side of the ferry had a recessed, open vestibule with four small ramps that lowered to the landing stage. Steps lead to the open upper deck and there were doors to the main cabin. 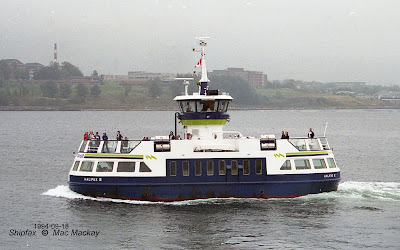 The "off" side of the  boats had windows to the main cabin.

Propelled by Voith-Schneider drives, they were highly maneuverable and could sidle up to the landing crab wise.  They also kept their engines running at efficient rpms at all times and varied speed and direction by adjusting the pitch of the vertical drive blades. In 1986 a third ferry of the same design named Woodside I entered service. A new terminal on the Dartmouth side of the harbour in the Woodside neighbourhood was built to serve the growing Dartmouth suburbs, however the three ferries were interchangeable and any one of the three could be found on either the main Halifax-Alderney or new Halifax-Woodside route. 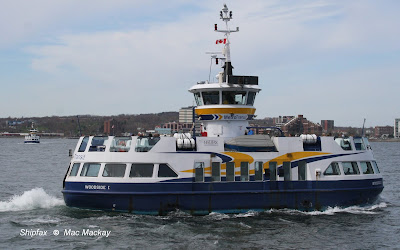 The boats had a variety of colour schmes over the years. At cruising speed the boats created a small "rooster tail" wake.

In 2013 the Halifax Regional Municipality began the next fleet replacement program. Between 2014 and 2018 A.F.Theriault + Son Ltd in Meteghan River, NS delivered five new boats, improved versions of the previous design. Named Christopher Stannix (2014), Craig Blake (2015), Viola Desmond (2016), Vincent Coleman (2018) and Rita Joe (2018), they allow for efficient service of both routes at all times while allowing for one boat to be out of service for maintenance and refits. 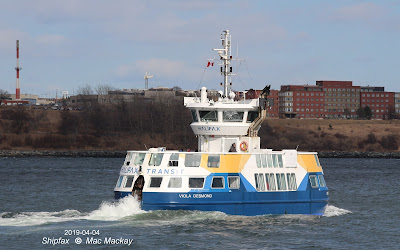 The second generation ferries are quite similar to the first, but have a roomier wheelhouse and peculiar exposed exhaust stacks (and distinctive sound).

As the new boats were delivered the first generation boats were decommissioned then put up for sale. In the end all three were sold to Toronto Island Transit Services Inc, a private enterprise associated with an amusement park in Toronto. Dartmouth III made the long haul to Toronto on its own in 2017, despite having no sleeping accommodation or galley. Since arriving in Toronto it has apparently not entered service.

The other two boats also remain idle, but closer to home, with Halifax III in Sambro, NS and Woodside I in Lunenburg, NS. 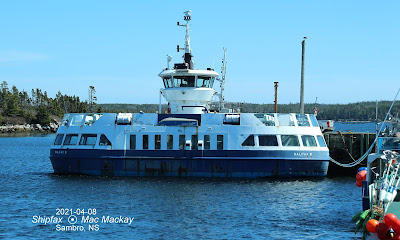 Looking somewhat uncomfortable amid the fishing vessels, Halifax III is tied up in Sambro, NS. 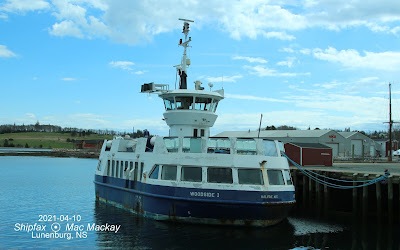 Woodside I is looking equally unhappy in Lunenburg, with patches of pealing paint.

There is no sign that either one of the boats will be going anywhere soon, which is unfortunate since they did have some useful service left when they were retired. However with no maintenance, and sitting idle that may no longer be the case.