Coinciding with the end of the company's 75th anniversary year in 2020 and its successful New York Stock Exchange IPO in January 2021, the now publicly traded ZIM Integrated Shipping Services has rolled out a new corporate slogan and trademark on its containers.

Most shipping lines emblazon their boxes with corporate colours and name in large letters, but rarely use any slogans or other wording. ZIM has been an exception since the introduction a few years ago of the ZIMonitor wording on its reefer containers. The unique service allows customers to track, monitor and control temperature regulated containers remotely. It also provides a rapid intervention service to call in technicians if a problem is detected. Using GPS satellite communication technology the service sends text messages (SMS) or e-mails showing temperature, humidity, or alerts such as door opening or route deviation.

Now ZIM has added a new slogan to its dry containers, highlighting "the Z Factor", highlighting ZIM's commitment to personalized service. The newly marked containers have been showing up on ships and trains in and out of Halifax. I spotted one of the new boxes on board the feeder ship Ilios as it arrived today. (Amidships at deck level.) 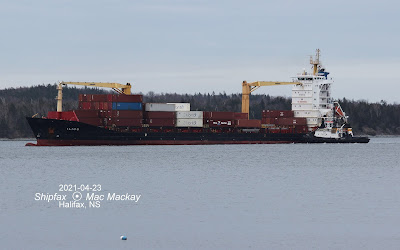 There was also a Z Factor box on the ship when it arrived for the first time on April 11 but I did not point it out.

ZIM has not given up its widely recognized and traditional "seven star" trademark, which is still applied to containers. A different 'LOGO" that appeared on some ships sides for many years seems to have disappeared during 2020. 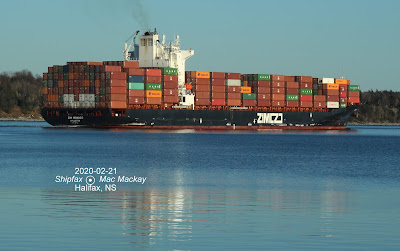 As recently as February 2020 Zim Monaco displayed the old [Z] symbol, which has now been painted over on other ZIM ships.
ZIM ships carried that symbol for many - certainly as far back as 1975 when the ZIM New York was one of their early container ships: