Return of the Regulars, Updates and Miscellany

It was a day for the return of two regular callers, and while this would not normally be worthy of extra notice, there was a difference.

First in this morning was the ONE Motivator renamed as recently as March from its original name MOL Motivator. That is the name it carried on its last visit to Halifax. The 78,316 gt, 79,278 dwt ship has a capacity of 6724 TEU including 500 reefers. A 2011 product of Mitsubishi Heavy Industries, Nagasaki, it is still operated by Mitsui OSK Lines, but works under the banner of Ocean Network Express (ONE), the combined container shipping segments of MOL, K-Line and NYK. 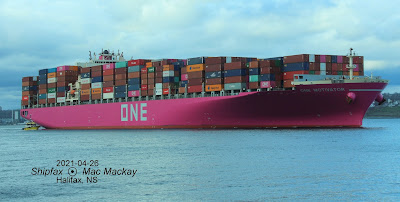 On departure late this afternoon the ship showed off its still fresh magenta hull paint, the unique trademark of ONE. That coating was likely applied when the ship underwent its most recent surveys last month, probably in Singapore. The ship sailed from Colombo, Ceylon on April 5, so was not held up while transiting the Suez Canal April 14-15. The ship Ever Given had been refloated and the backlog of delayed ships had been cleared by then.

To see what the ship looked like in MOL colours just over a year ago see: March 2020.

The return of another regular was not greeted with much fanfare, but it was a welcome sight. The Eimskip container/cargo ship Lagarfoss ran into trouble 230 miles east of Iceland on December 27, 2020 and had to be towed back to Reykjavik due to engine breakdown. Dramatic photos taken at the time showed the ship labouring in heavy seas, see: Lagarfoss .

The ship was not labouring today, but it was certainly rolling even in the relative calm inside Maugher's Beach in the Middle Ground area. (You can see the top of the containers). 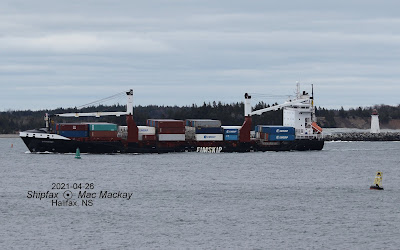 The Lagarfoss was built in 2014 by Shenfei Shipbuilding Co in Rongcheng, China. With a gt of 10,119 and dwt of 11,811 it has a container capacity of 880 TEU and carries a pair of cranes. The nearly six day run from Iceland must have been a rough one as weather between here and Newfoundland has been particularity windy with resulting high seas.

That weather was no doubt the cause of the bulker Thunder Bay moving from Gold Bond Gypsum to anchorage after completion of loading last night. It is the ship's first visit this year after a winter layup from January to March in Montreal.

A Trillium class self-unloader, the 24,430 gt, 34,433 dwt ship was built by Chenfxi Shipyard in Yangyin, Jiangsu, China and entered service in 2013. Originally intended for Great Lakes / Seaway trade it has been strengthened, allowing it to travel to the Atlantic coast. However there may be restrictions (or prudence) that keeps the ship in port during bad weather.

The ship arrived in ballast from Sept-Iles, QC, where it had planned to load iron ore pellets. However a fire in one of the reclaimers at Rio Tinto -IOC on March 31 has shut down ore shipments for some time, and the cargo of gypsum may be a scratch backhaul to get the ship back to the lakes. It is expected to sail tomorrow when sea conditions improve.

Yesterday's post on MSC Veronique had the ship sailing for Montreal as the next port, however the ship went to anchor outside Halifax instead.  The scheduled longshore labour strike began this morning in Montreal and operations there have ground to a halt. The federal government threatened to legislate an end to the strike, but as a minority government it will need the support of the opposition parties to pass the legislation, and the cooperation of the Senate, which could take a week or more.

Early this afternoon (April 26)  MSC Veronique was seen to get underway and headed northeast at 13 knots. Whether this was to get out of an anchorage with poor holding capability, or due to an optimistic outcome for the strike remains to be seen.

While commercial shipping was not enjoying the conditions outside, the Royal Canadian Navy appeared to be taking advantage of an opportunity for rough water boat handling. HMCS Goose Bay has been anchored outside Maugher's Beach for a couple of days now, and several small craft were noted nearby today. 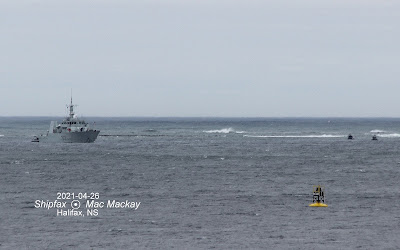 Several of the Kingston class Coastal Defence Vessels have been active in recent days, as they usually are at this time of year. The vessels are used for Reserve training which ramps up at the end of university academic year.