It appears that the ship Caruso will finally be removed from its resting place in the village of Marie Joseph on Nova Scotia's eastern shore.  A notice appeared in Saturday's newspaper issued by Fisheries and Oceans Canada that the Minster plans to dispose of the vessel. Under terms of the Canada Shipping Act the Minister may act to sell, dismantle, destroy or otherwise dispose of the vessel since it poses a pollution threat. 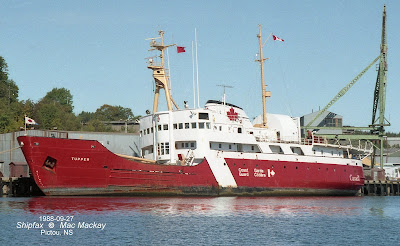 Originally named CCGS Tupper it was fine little icebreaking buoy tender. In line with longstanding Coast Guard policy the ship was decommissioned at the end of its service life and handed over to the Crown Assets Disposal Corp to be sold for re-use. The CCG has never sold a ship directly for scrap.

I covered the ship's career here in previous posts:

The ship has been a blight on the village ever since a local owner beached it for scrapping. Work proceeded slowly and seems to have been abandoned eventually. 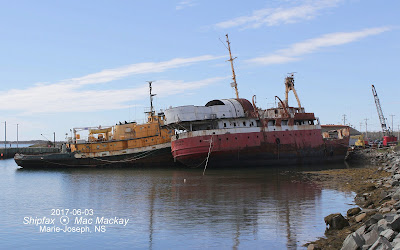 I have not been to Marie Joseph since 2017 when I took this photo, so I don't know what progress if any there has been on demolition. The same owner purchased the tug Craig Trans (on the left in the photo) which was also to be demolished. I have no update on its status either. See my last post on it:

It is a shame to see once useful ships slide into ruin, beached on some stretch of shoreline. However it is good that the Minister of Fisheries + Oceans finally has authority to clean them up. Nevertheless, the department is ultimately at the root of the problem for trying to recoup a few dollars by selling old ships instead of paying to have them scrapped.

The history of those ships, once sold, should be a huge embarrassment to the government. Any number have been abandoned by "dreamers" who could not afford to recondition them. Others fell into the hands of drug smugglers or other unscrupulous owners and left for someone else to dispose of. Passing them off as "hot potatoes" instead of disposing of them in an environmentally responsible manner is just plain wrong.