CSL Americas had two ships in port today, both to load at Gold Bond (formerly National Gypsum) and both arrived from Sydney, NS where they had delivered coal cargoes.

First in was CSL Spirit which docked this morning and began to load. We have not seen this ship in Halifax for a long time. It was built in 2001 at Jiangnan Shipyard, Shanghai (although launched in 1998!)  with tonnages of 41,428 gt, 70,018 dwt. It was a frequent caller here until 2011 when it was brought into Canadian registry.

The ship appears unchanged from this 2003 photo.

CSL used it in Sept-Iles, QC to top up large ships that could not load to full draft at the ore docks. In 2015 it reverted to Bahamas flag. It seems to have been working the Pacific coast of  South America until 2020. 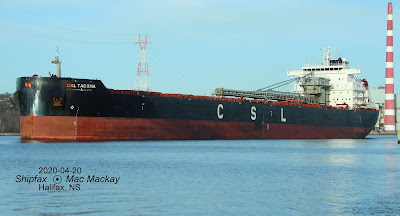 The second ship to arrive is CSL Tacoma a regular caller of the Trillium  class, also built in China but in 2013 and 43,691 gt, 71552 dwt - very similar in size to its fleet mate, with comparable unloading rates, but very different in every other way. It went to anchor in Bedford Basin until its fleet mate sails. 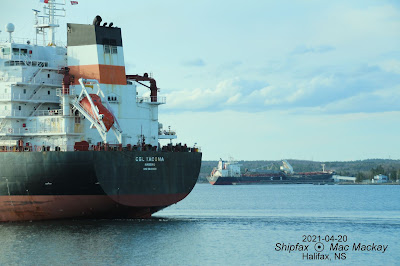 Catching two CSL ships in the same frame is a rare feat.
.