The "Ultra" class container ship CMA CGM Corte Real arrived at PSA Halifax at noon time today April 28 on the Columbus JAX service. Columbus JAX ships usually call on the weekends, so a Wednesday arrival is somewhat unusual. It sailed from Colombo, Sri Lanka April 10 and passed through the Suez Canal April 17-18, so does not appear to have been delayed by the aftermath of the Ever Given blockage. 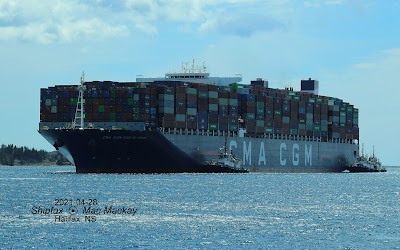 The ship's measurements of 151,446 gt and 165,182 dwt give it a capacity of 13,830 TEU (including 800 reefers). It was built in 2010 by Daewoo Shipbuilding + Marine Engineering , Okpo, South Korea. Those tonnages are greater than CMA CGM's Argentina class ships that claim a container capacity of more than 15,000 TEU. The ships have nearly identical measurements of 365 meters long x 51 meters width.

CMA CGM Corte Real appears to have taken its pilot at the outer pilot station, and was joined by a tethered escort tug (Atlantic Oak) at the regular pilot station. Two more tugs, Atlantic Fir at the bow and Atlantic Beaver toward the stern met the ship in the Middle Ground area to assist in turning and berthing at Pier 42.