Nirint Shipping B.V. is a Dutch company operating between Europe, the Caribbean and the north coast of South America. Its ships generally call in Halifax northbound  every two weeks en route from Cuba to Europe. They unload nickel sulfides from Moa, Cuba, for processing in Canada.

Currently the company employs four ships, one of which is Gotland a general purpose / heavy lift ship, configured to carry containers, general and breakbulk. At 12,772 gt, 17,409 dwt the ship has a capacity of 834 TEU including 60 reefers. It also carries three cranes, two of 150 tonnes capacity (and combinable) and one of 80 tonnes capacity.

Generally the ship leaves one hatch free to work the breakbulk cargo, but on arrival Sunday, April 11, the ship appeared to have a full deck load, so will have to land some containers first to access the cargo hold.
The ship was built in 2011 by the Xinshun Shipyard Group Co Ltd in Yueqing, China as Rickmers Tianjin, one of more than 100 ships in the venerable Rickmers fleet. Dating back to 1834 and the age of sail, the Hamburg based, family owned company failed rather spectacularly in 2017.  However this ship had been previously sold in 2015 to Gotland Schiffahrts GmbH and renamed Gotland.
After unloading in Halifax, the ship will sail for Barcelona and Rotterdam before beginning another cycle.
News?
Information in the port is that the nickel sulfides import operation will be moving to the Richmond Terminals at Pier 9B - 9C in the Narrows, between the two bridges. 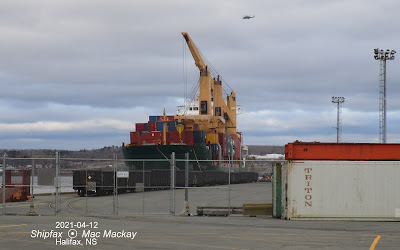 The Nirint ships currently unload the material, which is shipped in "jumbo bags" and the bags are transported to the freight shed at Pier 30-31 or loaded directly into open gondola rail cars. The operation takes up considerable pier and shed space which PSA Halifax wants due to increased traffic from MSC and for future expansion.

The Pier 9B and 9C area was expanded and the sheds rebuilt more than five years ago, but has been under utilized. The area is served by rail sidings which have not been used until the last few days when some box cars were spotted at Shed 9B. 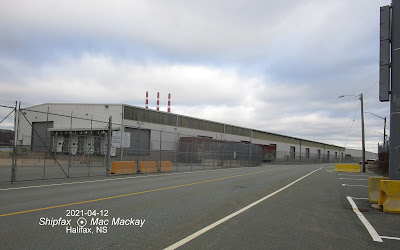 Word is that the Richmond shed will also be used to store paper, brought in by rail. If so we might expect to see dedicated paper carrying ships, such as Spliethoff's coming in to load.
It was always though that CN objected to switching in the area, but perhaps PSA Halifax has persuaded them that it is worth their while.
.
Posted by Mac at 7:45 PM