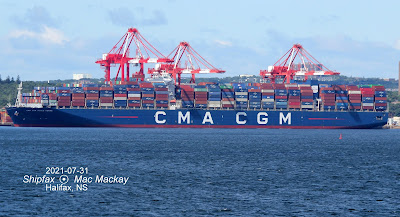 At PSA Halifax it was CMA CGM Jules Verne another of the Ultra size ships on the Columbus JAX service. Built in 2013 by Daewoo, Okpo. it is a 176,435 gt, 186,470 dwt ship with a capacity of 16,020 TEU. Built to the same design (Daewoo 16000) as the current "largest container ship in Halifax" title holder CMA CGM Marco Polo, the Verne may be a few gross tons smaller than the Polo. However as a calculated (rather than measured) description of the ship's cubic capacity, gross tonnage is not a fair comparison. In terms of lifting capacity, deadweight tonnage may be a better gauge. Verne's 186,470 dwt is just shy of Polo's 187,625 tonnes. Nevertheless both ships have the same hull dimensions ( 396m x 53.6m) and declared container cafrrying capacity.

I will leave it up to someone more fastidious about these things than I am to declare a winner.

At the other end of the harbour, IT International Telecom welcomed the Offshore Construction Vessel Siem Dorado arriving from Aberdeen, Scotland. 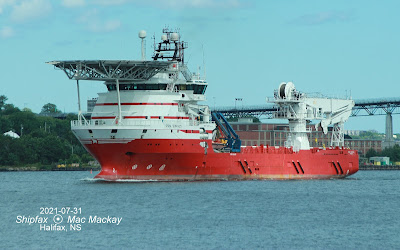 Built in 2009 by Kleven Ulsteinvik in Norway, it is a 4869 gt, 4257 dwt vessel, equipped with the usual variety of thrusters. Coupled with a diesel electric propulsion system, it has a high grade dynamic positioning capability. It is also equipped with a 100 tonne capacity, heave compensating crane, equipment to support an ROV including a moon pool, not to mention the obvious helicopter landing platform.
Owner Siem Offshore AS is the parent company of Secunda Canada LP, but this ship appears to be directed by the parent company. It was built as Siem Dorado but carried the names Adams Vision 2010-2013, Siem Stork 2013-2015 and Siem N-Sea 2015-2019. The ship was laid up in 2020 and has been reactivated for whatever work IT has for it. I am not aware of any application for a coasting license, so the work is likely well offshore, outside territorial waters.
.