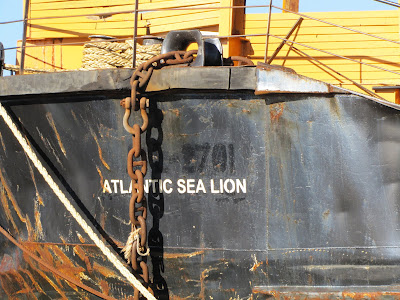 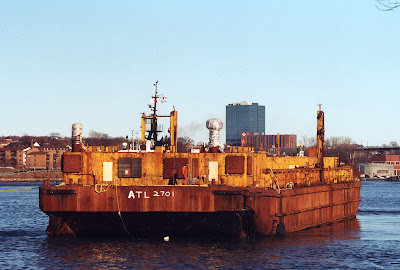 2. ATL 2701 leaving Halifax March 20, 2001 bound for refit in Shelburne. She had been patched up and internally cleansed in drydock in 1996, but not repaired. 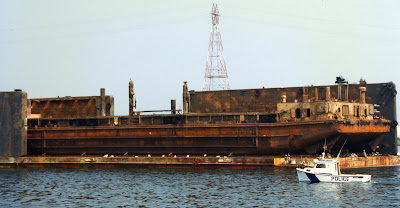 4. Irving Whale arrives on the Boa Barge 10 August 7, 1996. Stern damage, including punctures and bent skegs, was likely incurred when she hit the bottom in 1970.

It was a return visit to Halifax for the barge Atlantic Sealion this evening, when it arrived in tow of the tug Point Halifax. The tug [see Tugfax for more] returned directly to Port Hawksbury after handing off the tow to the tugs Atlantic Oak and Atlantic Larch, who wrangled the barge into the Novadock floating drydock.
Built by Saint John Dry Dock in 1966 as a tanker barge, it gained notoriety on September 7, 1970, when it sank off Prince Edward Ialand. If you guessed that her original name was Irving Whale - you win a prize! She sat on the bottom of the Gulf of St.Lawrence for 26 years, and reportedly oozed bunker C until it became imperative to raise her, at taxpayers expense. After a first attempt in 1995, she was raised in 1996 and arrived in Halifax on August 7 on a submersible barge. After refloating in Bedford Basin she was towed to Halifax Shipyard by the tugs Point Halifax and Point Vim, where she was drydocked to seal her hull and remove other pollutants.
It surprised many to learn, after the multi-million dollar effort to raise her, that she still belonged to J.D.Irving Ltd, who took possession.
The barge was renamed ATL 2701 and was laid up until March 2001 when she was towed out to Shelburne by Altantic Elm. There she was refitted for wood chip service to run from Nova Scotia to Saint John, NB. Since that service ended she has been used in a variety of barge services based out of Port Hawksbury.
Her most notable trip was the November -December 2007 load of pipe racks from Dartmouth to Toronto in tow of Ocean Delta. She got caught in very bad weather and ice and was delayed all along the way, requiring icebreaker assistance out of Quebec City . She reached Prescott, Ontario where McKiel tugs took her over and delivered her to Toronto December 26. She had to over winter in Toronto and was towed out to Quebec City in the spring of 2008.
In 2009, as part of a general renaming policy within Atlantic Towing, she was given the name Atlantic Sealion. This theme continues one started by Irving when barges were named after sea mammals and fish. There was an Irving Sealion at one time, and that mammal was picked this time rather than reverting to the whale.
Because she was preserved in the frigid water of the Gulf for over a quarter of a century, she really looks more like a twenty year old barge than a forty-four year old. The Shelburne refit was extensive as well, adding raised side walls and new deck equipment.
Tonight's arrival was in the dark, so no photos, but I found a few in the file.
.
Posted by Mac at 9:00 PM