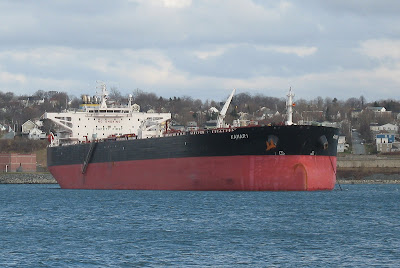 Kamari at anchor, bow to the wind. The bunkering tanker is hidden on her port side.

With the anchor down, Kamari has begun to swing in the wind. Atlantic Oak is tight under the stern recovering her escort line and A.P.A.No.1 has set out to disembark the pilot.

Kamari approaches the anchorage position with Atlantic Oak positioned to "put on the brakes."

The Greek flagged Kamari arrived for bunkers this morning. It is a Suezmax tanker of 83,545 gross tons/ 156,853 deadweight built in 2009 by Rongsheng Heavy Industries in China.
Its owners are reported to be Lilium Owning Co of the Marshal Islands, but this appears to be a paper entity. In fact the ship is controlled and operated by Heidmar Group of Norwalk, CT, USA. This company in turn is 49% owned by George Economou (of Dryships fame). He purchased his interest from Morgan Stanley in 2008, which still owns 49%, and management 2%.
Heidmar owns five tanker pools trading in Product, Panamax, Suezmax, Aframax and VLCC size ships. This ship works in the Blue Fin Tankers Ltd pool.
The ship arrived with Atlantic Oak on a stern line to provide braking and steering. It is a windy day and with the ship high out of the water, it presents a tremendous sail effect. Once its anchor was fast, the ship swung 180 degrees in the wind, and was facing outbound, but then settled down with her bow into the wind, but creatnig a bit of a lee for the bunkering tanker Algoma Dartmouth on her port side.
Ships of this size usually use number one anchorage, south of George's Island, but that position is occupied by the accommodation rig Chemul undergoing trials.
Addendum: When the ship sailed, after dark, she went out west of George's Island - a very impressive sight in that narrow (but deep) part of the harbour.
.
Posted by Mac at 11:32 AM