Mattea in and Vinland gone 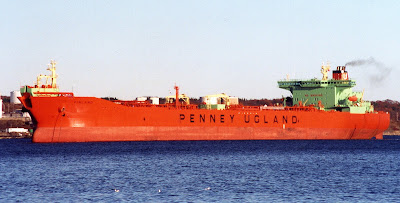 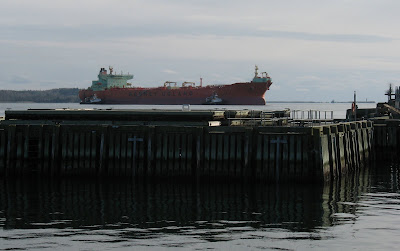 While remarking on the arrival of Mattea for maintenance on December 9, I was unaware that her fleet mate Vinland has left the Canadian flag and has now been registered in Norway.

Vinland was built in 2000 and sailed from the Ulsan shipyard September 10 of that year. On arrival in Canada she took up a ten year charter plus 15 year option to the seven owners of the Terra Nova oil field. The decision has apparently been made not to take up the 15 year option. Vinland's Canadian registry was closed November 10.

Reasoning behind this decision not to use a purpose built ship which is ably suited for the role, may be related to the current glut of tankers and low charter rates for foreign ships. Certainly oil production at Hibernia, Terra Nova and White Rose, have been below expectations recently, and that may also be a factor.

Another tanker which had Canadian crews, Catherine Knutsen, has also been reflagged.

Opinion seems to be that "second leg tankers" will be relied upon more and more. In other words Mattea and the remaining shuttle tankers will not be running to refineries in the US or Canada anymore. They will strictly shuttle to Whiffen Head or perhaps Point Tupper. Foreign flag (second-leg) tankers will then transfer the crude to refineries, at lower cost.

However my opinion is that current Canadian cabotage laws may also be behind the decision. Foreign tankers can be chartered in for shuttle work if no Canadian tankers are available. Get rid of the Canadian tankers and you have a loophole which allows for very low cost operation in Canadian waters, using non-Canadian crews. Don't be surprised to see applications for Vinland or similar ships to operate these shuttle services.