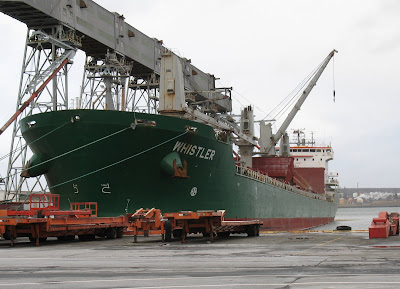 Whistler lies at pier 27-28, with the loading spouts working a far corner of the after hold.

The Cyprus flag bulker Whistler arrived on December 26 at pier 26, and prepared to load wood pellets. Built in 2007 in Tianjin, China, the ship measures 22790 gross tons and has a deadweight of 37,272 tonnes.
It is a member of the Canadian Forest Navigation (CANFORNAV) fleet, one of the biggest, and least known Canadian shipping companies. Owning no ships of its own, it charters in ships from a variety of owners, in this case Greek. See http://www.canfornav.com/ Despite the company's name, the ships frequently carry grain.
Their ships are painted green, with their own distinctive funnel marking, with tree symbols, and are named for species of ducks. Other ships in the fleet have names such as Wigeon, Bluebill, Ruddy, etc.,
These ship trade primarily to the St.Lawrence Seaway, and are built for efficient passage through the locks. That is why they have unusual enclosed bridges, with stubby wings, and forward and aft facing doors. These were obviously added to the standard design of the ship when it was built. Projecting bridge wings are not permitted on the Seaway due to potential damage from the lock walls.
Whistler is due to sail at midnight December 29, neatly fitting itself in between the Christmas and New Year's holidays, despite some rain and weather delays in loading.