Back in Business-1000 hrs update 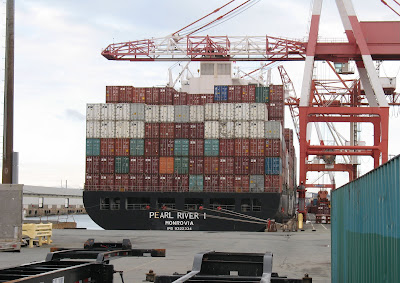 1. Pearl River I at pier 36 - the first arrival since Sunday. 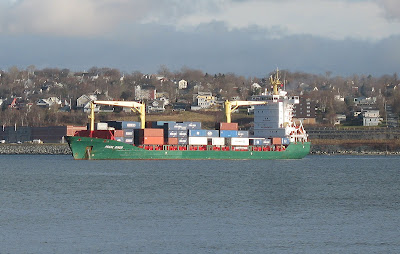 2. Pearl River weighs anchor at 1000, and is the first piloted vessel to sail since Sunday.


By 1000 hrs AST the Port of Halifax was back in business, with ships entering and leaving. First to arrive was Pearl River I, a Zim container ship, bound for Halterm. It picked up its pilot about 0930.
First to leave was Pearl River, the CMA/CGM ship that has been in port since Sunday. It got underway from anchorage at 1000.
It is not unheard of, but certainly rare that two ships with such similar names would be passing each other in the harbour!
Pearl River I is a Liberian flag vessel, built in 2007 by Dalian New Shipbuilding in China. It is a 39,906 gross tons ship with a 4250 TEU capacity. It was built as Zim Vancouver, but adopted its current name soon after. It is owned by Ofer (Ships Holding) Ltd of Haifa- the principal shareholders in Zim. It is of the same class as other Zim ships that call here, but is the only ship on the rotation without a Zim name.
There will be a steady stream of ships coming in for the rest of the day, and pilots and tugs will be kept very busy.
.
Posted by Mac at 10:17 AM